Earlier, China received the bulk of scrap plastic from around the world, processing much of it into a higher quality material that could be used by manufacturers. 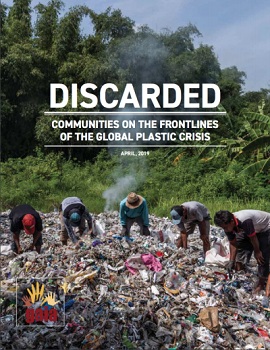 According to a new report, the Chinese Government’s ban on the import of foreign plastic waste has thrown the world recycling sector into chaos. The ban forced countries like the US and UK to find new ways to deal with their own trash, which has resulted in huge pile-ups of plastic waste in Southeast Asian nations.

The report titled ‘Discarded: Communities on the frontlines of the global plastic crisis’, by the Global Alliance for Incinerator Alternatives (GAIA) and Greenpeace, highlights the impact of China’s waste ban on communities in Southeast Asia.

Why don’t developed countries recycle their own plastic waste?

In developed nations, the cost of plastic recycling is very high, as a result in some cases, those collecting plastic and other recyclables have resorted to sending it to landfill sites as the scrap has piled up too quickly.

Some have been quicker to adapt to the new environment, such as some local authority-run centers that collect recyclables in Adelaide, southern Australia.

According to the campaigners of the issue, with only an estimated nine percent of plastics ever produced recycled, the long-term solution to the plastic waste crisis is for companies to make less and consumers to use less.

The Trump administration on April 25, 2019 initiated its first move towards extending protection for giraffes under the Endangered Species Act. The decision comes after legal pressure from environmental groups.

According to the United States Fish and Wildlife Service, its initial review has determined that there is substantial information that the listing may be warranted for giraffes.

The findings, which are to be published in the Federal Register, will begin a more in-depth review and public comment process that could lead to import restrictions on hunting trophies and body parts from giraffes, including hides and bones.

• The group, which designates endangered species, added giraffes to its "Red List" in 2016. It determined that the species as a whole is "vulnerable" to extinction and classified two subspecies as "critically endangered."

• There are now only about 68,000 mature giraffes left in the wild, with their number falling each year.

• A coalition of environmental and conservation groups petitioned the Fish and Wildlife Service in early 2017 to protect giraffes under the Endangered Species Act.

• After the administration took no action for nearly two years, the groups sued in December.

Biologists have warned for years that the world's tallest land mammal is at increasing risk of extinction from habitat loss, poaching and other threats. The wild giraffe population in Africa has declined by nearly 40 percent in just 30 years.

Giraffes are often hunted for meat in the nearly two dozen African countries. They increasingly are targeted by wealthy trophy hunters as other big-game animals have become scarcer.

More than 21,400 bone carvings, 3,000 skin pieces and 3,700 hunting trophies were imported into the United States over the past decade.