The launch of intelligence satellite EMISAT along with 28 others came days after India successfully test-fired an Anti-Satellite (ASAT) missile under the Mission Shakti. Dena Bank and Vijaya Bank became a part of the Bank of Baroda, leading to the creation of the India's second largest Public Sector Bank after the SBI.

The satellites were launched aboard the PSLV-C45 from Satish Dhawan Space Center in Sriharikota, Andhra Pradesh. This was the 47th mission for ISRO’s Polar Satellite Launch Vehicle (PSLV) Programme and was the 71st launch vehicle mission from Sriharikota.

For the first time, ISRO invited common people to view the launch.

• Weighing 436 kg, the EMISAT Satellite has been developed for monitoring radar network by India.

• It will help locate positions of enemy radars.

Rocket to be converted into a payload platform

Generally, after the launch mission is over, the rocket engine is left discarded as space debris. However, the ISRO has now started a new trend by using the engine for experiments.

Following the launches, the fourth stage of the PSLV-C45 rocket will be brought down further to 485 km and will be used as a platform for different experiments by Indian institutions including ISRO.

It will be turned into a payload platform carrying three experimental payloads.

This will be the second time in a series that ISRO will use the launch rocket for experiments. Earlier in the last PSLV mission also, it adopted the same innovative method.

With this, Dena Bank and Vijaya Bank became a part of the Bank of Baroda, leading to the creation of the India's second largest Public Sector Bank after the SBI and India’s third largest lender overall after the SBI and ICICI Banks with a total business of more than Rs 14.82 lakh crore.

The amalgamation of Vijaya Bank and Dena Bank into Bank of Baroda was first announced in September 2018.

As per the Bank of Baroda, “The combined synergy of the three banks is aimed at deepening the relationship with the customers by offering wider range of products & services, enhanced network of branches, ATMs and a different banking experience.”

The power of 3 banks will create a contemporary banking entity with an ability to do more and reach further to fulfil customers with world class offerings backed by robust processes. 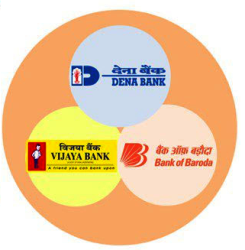 The ‘Scheme of Amalgamation’ of Vijaya Bank and Dena Bank with Bank of Baroda was approved by the Union Cabinet, chaired by Prime Minister Narendra Modi, on January 2, 2019.

Key Highlights of the ‘Scheme of Amalgamation’• Vijaya Bank and Dena Bank are the Transferor Banks and the Bank of Baroda is the Transferee Bank.

Strengths of the amalgamated bank• The amalgamated bank will be better equipped to meet the credit needs of a growing economy, absorb shocks and capacity to raise resources. • It would enable creation of a bank with scale comparable to global banks and capable of competing effectively in India and globally.• The amalgamated bank will have access to a wider talent pool, and a large database that may be controlled through analytics for competitive advantage in a rapidly digitalising banking context. • Public will be benefitted in terms of enhanced access to banking services through a stronger network and easy access to credit.

How these three banks will add value to each other?Dena Bank, with gross NPA ratio of 22 percent, is currently under the Prompt Corrective Action (PCA) framework and has been restrained from further lending. Dena bank would no longer be covered under PCA after amalgamation.Vijaya Bank is among the better performing public sector banks with a gross NPA ratio of 6.9 percent. The Bank of Baroda has a bad loan ratio of 12.4 percent. The Bank of Baroda has a wide spread network, while Dena Bank and Vijaya Bank are more regionally focused. The Global network strength of Bank of Baroda will be leveraged to enable customers of Dena Bank and Vijaya Bank to have global access.Dena Bank’s strength in the Micro, Small and Medium Enterprises (MSME) will further augment the strength of the other two banks to position the amalgamated bank for being an MSME Udyamimitra.Merged entity will benefit from Bank of Baroda’s high Capital Adequacy Ratio; Vijaya Bank’s strong asset quality position; and Dena Bank’s strong CASA (Current Account Savings Account) base.