The BBIN is a big initiative in the region, which is aimed at improving rail and road connectivity in the region. 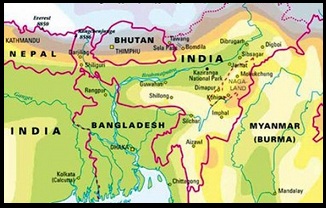 The Bhutan government has decided to send the bill for ratification of the Bangladesh-Bhutan-India-Nepal (BBIN) initiative for road and rail connectivity to its upper senate.

The BBIN is a big initiative in the region, which is aimed at improving rail and road connectivity in the region.

The agreement for the initiative – the BBIN Motor Vehicle Agreement -was signed by the four member nations in June 2015.

However, only Bangladesh, India and Nepal have implemented the agreement, Bhutan is yet to accord its ratification of the agreement.

The Asian Development Bank (ADB) has been providing technical, advisory, and financial support to the BBIN MVA initiative as part of its assistance to the South Asia Sub-regional Economic Cooperation (SASEC) program, which is a project-based economic cooperation initiative that brings together the BBIN countries as well as Maldives, Sri Lanka and Myanmar.

The National Green Tribunal (NGT) has formed a Central Monitoring Committee to prepare and enforce a national plan to make over 350 river stretches across the country pollution free.

The committee would comprise a representative of NITI Aayog, secretaries of Ministry of Water Resources, Ministry of Urban Development and Ministry of Environment, the director general of National Mission for Clean Ganga and the Chairman of the Central Pollution Control Board.

The Chairman of CPCB will be the nodal authority for coordination.

Objective : The committee has been composed to monitor pollution of rivers, as it has caused serious threat to the safety of water and environment.

• Besides checking river pollution, the central monitoring committee will coordinate with the River Rejuvenation Committees of the states and oversee the execution of the action plans, taking into account the timelines, budgetary mechanism and other factors.

• The chief secretaries of the states will act as the nodal agency at the state level.

• According to NGT bench, the chief secretaries may undertake review of the progress of the river rejuvenation committees by involving the concerned secretaries of the department of urban development, environment, industries, irrigation and public health and health.

• The green tribunal also directed the Ministry of Environment to consider a policy for giving environmental awards to outstanding persons (natural and juristic) and institutions or states and introducing "dis-incentives" for non-compliant states. The tribunal has given the Ministry time till June 30 to frame such a scheme.

• As per the tribunal, the Central Monitoring Committee may consider identifying experts, best practices and models for use of treated water, including plan to supply untreated sewage for a price or otherwise so that the concerned needy party can treat and utilise such water.

• The use of treated water for agriculture or other purposes may save potable surface and groundwater.

• The first meeting of the Central Monitoring Committee may be held by June 30. The NGT has directed the panel to submit its report by July 31.

In a news report published recently by a reputed media firm, it was pointed out that around 351 polluted river stretches have been noted by the CPCB and 117 such stretches are in the states of Assam, Gujarat, and Maharashtra.

The CPCB has apprised the concerned states of the extent of pollution in the rivers.