All India Football Federation President Praful Patel has become the first Indian to be elected as a member of the FIFA Executive Council. 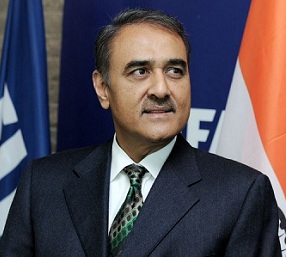 Praful Patel, the President of All India Football Federation has become the first Indian to be elected as a member of the FIFA Executive Council. He received 38 out of 46 votes.

The election was held during the 29th Asian Football Confederations Congress in Kuala Lumpur on April 5, 2019. Patel's term in the council will be for a period of four years, from 2019 to 2023.

• Patel was one of the eight candidates contending for a spot in the FIFA Executive Council from the Asian Football Confederation (AFC). Only five among them were elected.

• The AFC Electoral Committee will be responsible for all tasks relating to the organisation, running and supervision of the elections.

• The FIFA Governance Committee will nominate representatives to monitor the running of the elections for FIFA Council positions.

The Indian Navy and Council of Scientific and Industrial Research (CSIR) on April 5, 2019 signed a Memorandum of Understanding (MoU) to undertake joint research and development of advanced technologies for the Indian Navy.

• The agreement facilitates a formal framework for interaction between the Indian Navy and the research council.

• Under the agreement, joint research and development activities will be undertaken in the diverse fields of Mechanical, Electronics, Communication, Computer Science, Propulsion systems, Metallurgy and Nanotechnology.

• The agreement will be a collaborative arrangement between labs of CSIR, the Indian Navy and the Indian industry.

• Some of the immediate projects to be progressed under this MoU include development of alternative desalination technologies, installation of wireless MEMS based sensors for remote operation and residual life assessment studies of gas turbine generator blades to improve reliability.