Union Health Minister Harsh Vardhan assured on April 6, 2021 that there is no shortage of COVID-19 vaccines in any part of the country. 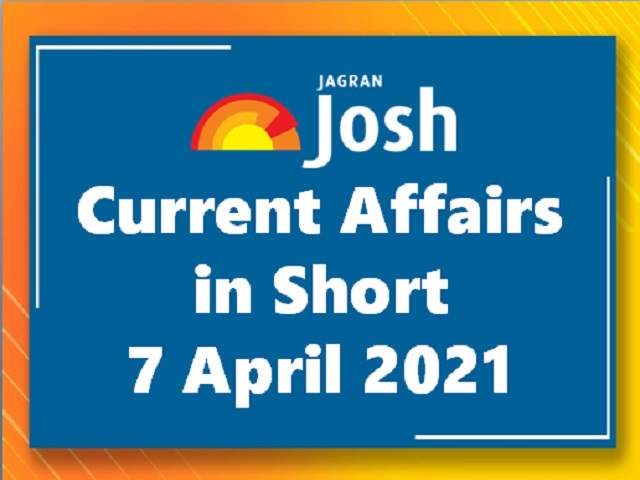 •Union Health Minister Harsh Vardhan assured on April 6, 2021 that there is no shortage of COVID-19 vaccines in any part of the country.
•He stated that the centre is providing the required quantities to all states and union territories.
•Speaking about the recent spike in COVID-19 cases in the nation, the Minister said that everything is still under control but pointed lapses, including casual behaviour and carelessness behind the surge.
•He pointed out that the country's recovery rate stands at 92.38 percent, while the fatality rate is 1.30 percent.

•The FIFA Council Bureau suspended the Pakistan Football Federation (PFF) with immediate effect on April 7, 2021 due to third-party interference, which is a serious violation of the FIFA Statutes.
•FIFA said in a statement that the decision was prompted by the recent hostile takeover of the PFF headquarters in Lahore by a group of protestors, which was followed by the removal of the FIFA-appointed normalisation committee of the PFF led by Haroon Malik. The leadership of the PFF was then handed over to Syed Ashfaq Hussain Shah.
•FIFA has issued a letter warning that the matter will be immediately submitted to the Bureau of the Council for decision if the illegitimate occupation of the PFF headquarters is not lifted and the office bearers recognised by FIFA are not permitted free access to the building to carry out their mandate.
•The Bureau of the Council decided to suspend PFF after the situation remained unchanged.

•Soliha Shabir from Jammu and Kashmir has added her name in 'India's World's Records' by becoming the first and youngest author in Jammu and Kashmir to recreate the life of Habba Khatoons poetry.
•Shabir has so far written three books- 'Zoon-The heart of Habba Khatoon', 'In the lawn of dark' and 'Obsolete-The poem Market'.
•The 22-year-old's book 'Zoon' is the first book that has recreated the theme of Habba Khatoon's poetry and essence.
•The young author is currently pursuing her Masters in English Literature.

•White House press secretary Jen Psaki informed on April 6, 2021 that the United States will not issue vaccine passports.
•He stated that the US government is not going to support a system that requires Americans to carry a credential. He stated that there will be no federal vaccinations database and no federal mandate requiring everyone to obtain a single vaccination credential.
•Vaccine passports mean that the individuals would have to provide proof that they have received the COVID-19 vaccine shots.
•The US has decided against having such a system to protect the privacy and rights of people so that it is not used against people unfairly.

•India and China are likely to hold corps commander-level talks on April 9, 2021. The talks aim to resolve the ongoing issues along with the friction points in Gogra, Hot Springs and Depsang plains in Ladakh.
•The talks come after the successful disengagement in the Pangong lake area. The armies of the two nations are now likely to discuss further disengagement from Gogra heights and Depsang plains.
•The two countries were engaged in a border standoff for almost a year but disengaged from the most contentious Pangong lake area last month following extensive talks at both military and political levels.
•India and China held a total of 10 rounds of talks at the Corps Commander level to reach the arrangement to disengage from the Pangong lake area.