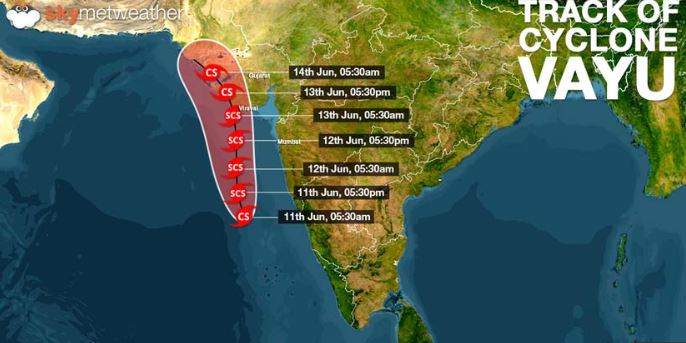 Cyclone Vayu Updates: Vayu will hit Gujarat coast today with wind speed of 180 kmph. It is expected to make landfall by 3 pm at Dwarka, Porbandar and west of Veraval.

Coastal areas of south Gujarat have kept on alert as Cyclone Vayu continues to intensify and may cross the Gujarat coast between Porbandar and Mahuva around Veraval and Diu early morning on June 13, 2019.

•    It will gain intensity over the next few hours; the wind speed would not go beyond 110-120 km per hour, as per the current forecast.
•    Cyclones in the Arabian Sea are not as intense as those formed over the Bay of Bengal, which also tend to form over a longer duration.
•    A ‘red’ warning for heavy and widespread rainfall has been issued for the Saurashtra and Kutch regions for June 13.
•    Coastal areas of Porbandar, Junagarh, Gir Somnath and Amreli districts are likely to be inundated with a storm surge of height of about 0.5 m above the astronomical tides at the time of landfall.

Cyclone Phet made landfall in eastern Oman with winds of 120 km/h northeast of Masirah. The storm later turned to the east and struck Pakistan. In Oman, the storm dropped heavy rainfall and Phet damaged roads and power lines, and washed away hundreds of cars.

Extremely Severe Cyclonic Storm Nilofar was, at the time, the third-strongest cyclone in the Arabian Sea. In late October 2014, it reached peak maximum sustained winds estimated between 205 km/h (125 mph) and 215 km/h (130 mph). The India Meteorological Department (IMD) named it Nilofar; the name refers to the water lily, and was suggested by Pakistan.

Cyclone Chapala became the first recorded storm to make landfall in Yemen as a very severe cyclonic storm – the equivalent of a hurricane – when it struck Ar Riyan with winds of 120 km/h (75 mph).