Devendra Fadnavis was elected unopposed as the leader of the BJP legislative party, as no other name was proposed for the post. 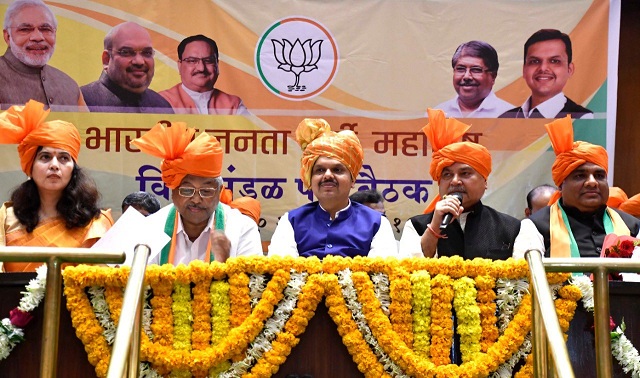 Devendra Fadnavis was re-elected as the BJP state legislative party leader in Maharashtra during a party meeting at Vidhan Bhawan in Mumbai on October 30, 2019.

Devendra Fadnavis was elected unopposed as the leader of the Maharashtra BJP legislative party, as no other name was proposed for the post. 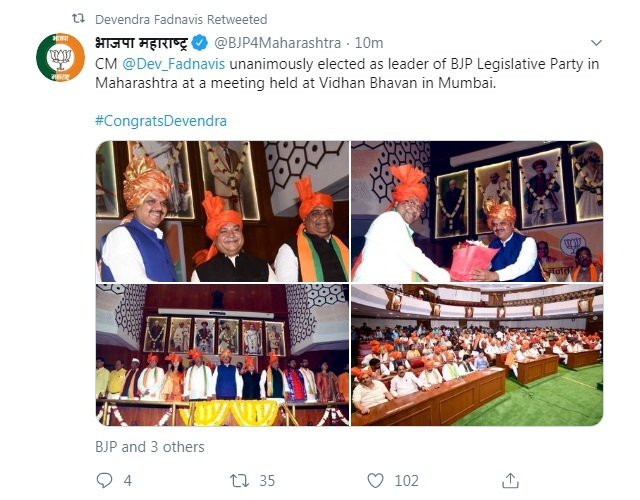 Upon his re-election, the current Maharashtra CM thanked all the BJP MLAs for putting their faith in him and giving him another chance to serve the state. Devendra Fadnavis also thanked PM Narendra Modi and Shiv Sena chief Uddhav Thackeray for his support during the Maharashtra Assembly Elections 2019 and assured that a government will be formed soon in Maharashtra.

The move comes amidst reports of the ongoing tussle between the BJP and the Shiv Sena over the 50: 50 power-sharing agreement. Due to the tussle, government formation has been delayed in Maharashtra.

The BJP had won 105 seats in the Maharashtra Assembly Elections 2019 and emerged as the single largest party, while the Shiv Sena had won 56 seats. The Congress and the NCP, on the other hand, won 44 seats and 54 seats respectively.

The BJP-Shiv Sena alliance, however, fell short of winning a full majority. A party requires 170 seats to form a majority government in Maharashtra. The BJP and Shiv Sena have reportedly got the support from most of the independent candidates.

After the election results were announced, the Shiv Sena pushed for the implementation of the 50:50 formula, claiming that it was decided upon between the two allies before the elections. Under the power-sharing formula, the parties had agreed to share the CM’s post for half term each. Devendra Fadnavis, however, recently asserted that he will be the Chief Minister for another five years.