Drone Registration in India is compulsory as drone owners have to get a unique identification number (UIN).

Drone Registration in News: The Directorate General of Civil Aviation (DGCA) has asked all the people possessing and flying drones to register their gadgets by January 31, 2020. Ministry of Civil Aviation (MoCA) said in a public notice that if they violate the rules then appropriate action will be taken against them under the Indian Penal Code (IPC) and the Aircraft Act.

The ministry said in a notice that it has come to the notice of the government that there are some drones and drone operators who do not comply with the Civil Aviation Requirements (CAR) standards. Drone registration started on January 14, 2020. 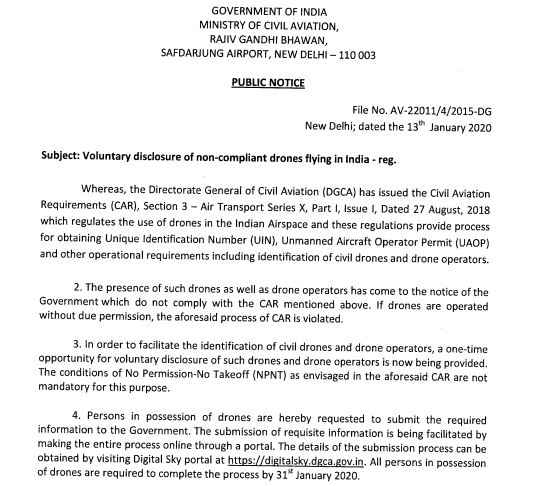 DGCA has informed that a Drone Acknowledgement Number (DAN) will be issued when registration will be completed. DCA clarified that DAN doesn’t confer any right to fly drones in India if provisions are given in Civil Aviation Requirements (CAR) does not fulfill.

The Directorate General of Civil Aviation (DGCA) implemented the CAR in August 2018 for drones. Drone owners have to get a unique identification number (UIN) for the drone under this rule. As per these rules, it is illegal to fly a drone without its registration.

All those drone owners who make voluntary announcement will get two unique numbers. These numbers will give the right to own a drone. One has to login at https://digitalsky.dgca.gov.in/ to register a drone.