A new study by NASA reveals that a geothermal heat source called a ‘mantle plume’ lies deep below West Antarctica, which explains some of the melting that creates lakes and rivers under the ice sheet. 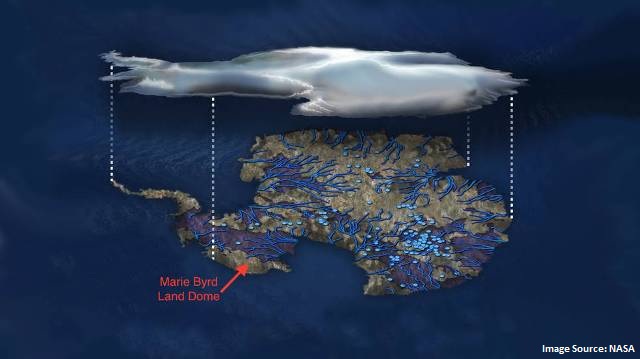 A new study by NASA reveals that a geothermal heat source called a ‘mantle plume’ lies deep below West Antarctica, which explains some of the melting that creates lakes and rivers under the ice sheet.

According to the study, the heat source may explain why the West Antarctic ice sheet collapsed rapidly in an earlier era of rapid climate change and why it is so unstable today. The study was published in the Journal of Geophysical Research: Solid Earth.

Why is this discovery important?

The stability of an ice sheet is closely related to how much water lubricates it from below, allowing glaciers to slide more easily.

Understanding the sources and future of the melted water under the West Antarctic ice sheet is significant to create an estimate of the rate at which ice may be lost to the ocean in the future.

About the heat source

• According to researchers, it was formed about 50 to 110 million years ago, long before the West Antarctic ice sheet came into existence.

• At the end of the last ice age around 11,000 years ago, the ice sheet went through a period of rapid, sustained ice loss when changes in global weather patterns and rising sea levels pushed warm water closer to the ice sheet.

• The researchers report that the same is happening today and they attribute the rapid ice loss to mantle plume.

This is not the first time that there has been a reference to the heat source. Around 30 years back, a scientist at the University of Colorado Denver had suggested that heat from a mantle plume under Marie Byrd Land might explain regional volcanic activity and a topographic dome feature.