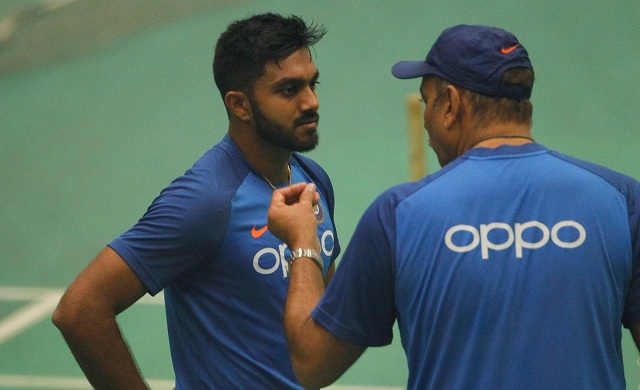 Vijay Shankar ruled out of World Cup, Mayank Agarwal to replace him

"Vijay Shankar sustained a non-displaced fracture of the left big toe, which will require a minimum of three weeks to heal. The injury rules him out of the ongoing World Cup," stated the BCCI in an official statement on July 1, 2019.

The 28-year-old Mayank Agarwal will replace Vijay Shankar in the Indian World Cup squad. The Karnataka opener, who made his Test debut against Australia in 2018, has not yet played in the ODI format. Agarwal’s name will have to be approved by the ICC's tournament technical committee, post which, he will join the Indian team in Birmingham, where India is scheduled to take on Bangladesh in its eighth next world cup match at the same venue where it lost against England. India is yet to face Bangladesh and Sri Lanka in the world cup group stage on July 2 and July 6 respectively.

Mayank Agarwal, the right-handed opening batsman, made his Test debut in Melbourne in December 2018 against Australia. He was called in as a replacement for Prithvi Shaw, who was ruled out of the series due to injury. In his debut match, he scored 76 runs in the first innings, which is the highest score by an Indian cricketer on a Test debut in Australia. Overall, he scored 195 runs in his debut series, with two half-centuries in Melbourne and Sydney Tests.

Mayank Agarwal became popular after his splendid performances in the Under-19 Cooch Behar Trophy in 2008-09 and 2010 ICC Under-19 Cricket World Cup, in which he was the leading run-getter for India. He was named in India's test squad for the Indian series against the West Indies in September 2018, but he did not play.

He has not yet played for India in the shorter ODI format. In domestic cricket, however, he has a strike-rate of 100.72 with 12 centuries and 14 fifties.

Vijay Shankar Injury: Vijay Shankar has been ruled out of 2019 World Cup due to toe injury. Shankar sustained a toe fracture during training when he was struck on his left foot by a Yorker from Jasprit Bumrah. The toe injury caused Vijay Shankar to miss out on the India vs England World Cup 2019 cricket match, which India lost by 31 runs. Rishabh Pant was included as his replacement in the Indian squad. Pant was brought in to bat at the esteemed number 4 position.

However, it was reported that Vijay Shankar was purposely kept out India’s playing XI on the pretense of an injury due to the backlash Vijay Shankar received on social media from fans, after his dismal performance in the ongoing cricket world cup. Vijay Shankar has made no special contribution so far to India’s wins in the ongoing world cup.
Now that Vijay Shankar's injury has caused him to be completely ruled out of the ICC World Cup 2019, the Indian team management is reported to have requested the ICC to consider Mayank Agarwal as his replacement. Rishabh Pant is, however, expected to continue to play for India at Number 4.

Mayank Agarwal along with Ambati Rayudu was one of the five stand-bys named by the BCCI after the announcement of the official 15-member Indian squad. One of the stand-bys, Rishabh Pant has already been included in the Indian world cup squad, after Shikhar Dhawan was ruled out of the ICC World Cup 2019 due to thumb fracture. Other standbys include Axar Patel, Navdeep Saini and Ishant Sharma.

The injury-hit India has another injury concern in form of KL Rahul, who had gone off the field during India’s fielding in India vs England world match after he bruised his back while attempting to take catch near the boundary. Rahul had failed to take the catch and had a bad fall at the boundary. Jadeja was brought in as sub to field in his stead. Though Rahul had come out to open for India, he was dismissed without opening his account.