India and Germany have signed an agreement on technical cooperation under the Indo-German Energy Programme – Green Energy Corridors (IGEN-GEC). 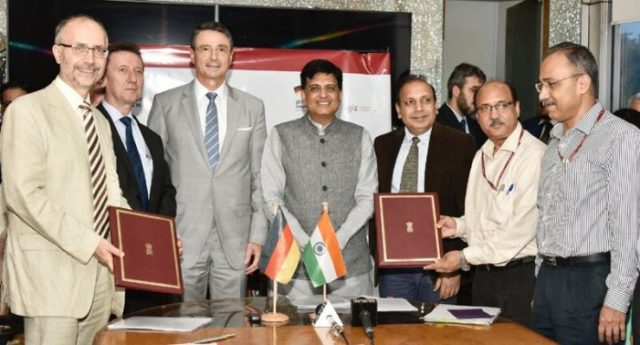 India and Germany signed an agreement on technical cooperation under the Indo-German Energy Programme – Green Energy Corridors (IGEN-GEC) on 28 August 2017.

The agreement was signed between Government of India’s Ministry of New and Renewable Energy (MNRE) and Deutsche Gesellschaft für Internationale Zusammenarbeit (GIZ) GmbH India on behalf of the Government of the Federal Republic of Germany.

• The IGEN-GEC programme was commissioned in 2013 by the Germany’s Federal Ministry for Economic Cooperation and Development (BMZ) and jointly implemented by India’s MNRE and GIZ.

• The main objective of this programme is to improve the sector framework and conditions for grid integration of renewable energies with conventional power grids.

• It also supports the implementation of India’s Renewable Energy Management Centre (REMCs), Green Energy Corridors scheme that is a prerequisite for large scale grid integration of renewable energy to achieve the 175 GW target for renewable energy generation capacity by 2022.

• The Indo-German Consultations held in Berlin on 11 April 2013 led both countries to agree on collaboration on the Green Energy Corridors.

• Subsequently, it was agreed upon that Germany would provide concessional loans of up to € 1 billion through German Development Bank (KfW) and up to € 10 million under technical assistance in forecasting, balancing, market design, network management and demand side energy efficiency, implemented by GIZ.

• These contributions have been further increased in recent years by concessional loans up to € 400 million for transmission infrastructure and up to € 7 million for training activities in the photovoltaic solar rooftop sector and energy efficiency in residential buildings under technical assistance through GIZ.

Green Energy Corridor Project: The Project aims to synchronise electricity produced from renewable sources, such as solar and the wind, with conventional power stations in the grid.

According to New & Renewable Energy Minister Piyush Goyal, the deal between GIZ and India will result in improved market mechanisms and regulations and will help India train its manpower and ensure grid stability & integration of renewable energy into grid thereby further ensuring a much safer & secure grid, which can even handle cyber challenges.

Goyal further added that Germany has been supporting India in achieving its goal for sustainable development through bilateral cooperation since almost six decades.