India recorded 22 per cent reduction in Maternal Mortality Ratio (MMR) since 2013, as per the Sample Registration System (SRS) bulletin that was released on June 6, 2018. The decline in the ratio was most significant in Empowered Action Group (EAG) states from 246 to 188.

India recorded 22 per cent reduction in Maternal Mortality Ratio (MMR) since 2013, as per the Sample Registration System (SRS) bulletin that was released by the Office of the Registrar General of India on June 6, 2018. 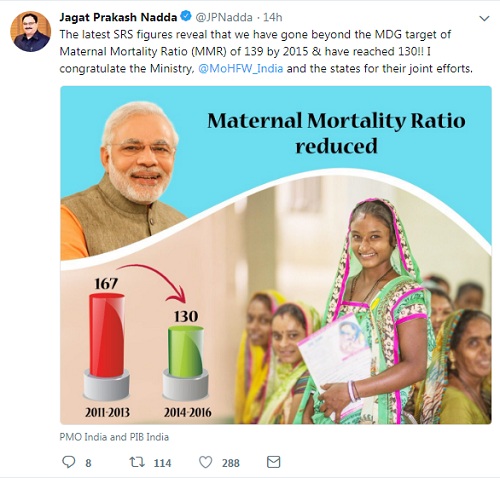 • The decline in the ratio was most significant in Empowered Action Group (EAG) states from 246 to 188.

• Kerala topped the list with 46 MMR, followed by Maharashtra with 61 and Tamil Nadu with 66.

• UP and Uttarakhand registered the second-highest MMR at 201, down from 285 in the last three years.

• Besides, three states including Kerala, Maharashtra and Tamil Nadu were able to meet the SDG target for MMR of 70 per 1, 00,000. Two other states, Andhra Pradesh and Telangana, are not very far behind.

• According to SRS Bulletin, there were nearly 12,000 fewer maternal deaths in 2016 as compared to 2013, with the total number of maternal deaths reducing to 32,000 for the first time.

• The figures mean that every day 30 more pregnant women are being saved in India as compared to 2013. 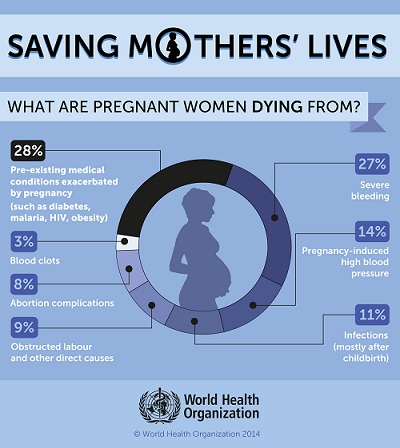 To understand the maternal mortality situation in the country better and to map the changes that have taken place, especially at the regional level, the government has categorised the states into three groups:

Other states: The category covers the remaining states and Union territories.

Reduction of mortality of women is an area of concern for the Governments across the globe.

The International Conference on Population and Development in 1994 had recommended reduction in maternal mortality by at least 50 percent of the 1990 levels by the year 2000 and further one half by the year 2015.