India has sent its first consignment of wheat to Afghanistan through Iran’s Chabahar port. The move has been seen as a landmark one to operationalise the new strategic transit route, bypassing Pakistan. The shipment was flagged off from Kandla port in Gujarat by Indian External Affairs Minister Sushma Swaraj and her Afghan counterpart Salahuddin Rabbani. 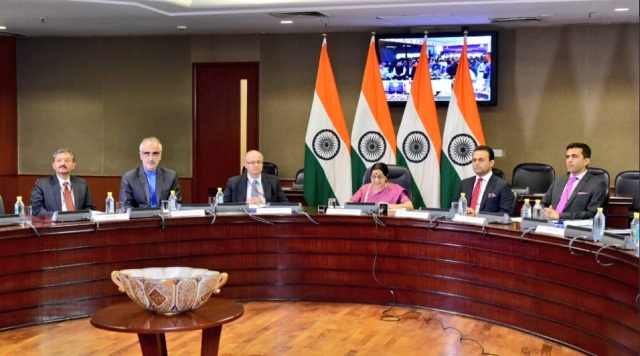 India on 29 October 2017 sent its first consignment of wheat to Afghanistan through Iran’s Chabahar port.

The move has been seen as a landmark one to operationalise the new strategic transit route, bypassing Pakistan. The shipment was flagged off from Kandla port in Gujarat by Indian External Affairs Minister Sushma Swaraj and her Afghan counterpart Salahuddin Rabbani, who joined in through video conferencing.

In an official statement, the Ministry of External Affairs said that the shipment of wheat is a landmark moment as it will pave the way for operationalisation of the Chabahar port as an alternate, reliable and robust connectivity for Afghanistan.

The consignment will be transported to Afghanistan from Chabahar through land route. Six more wheat shipments will be sent to Afghanistan over the next few months.

• India and Iran on 23 May 2016 signed 12 memorandum of understandings and agreements, among which the most important one was the trilateral transit agreement between India, Iran and Afghanistan on Establishment of International Transport and Transit Corridor.

• Under the agreement, India offered to develop the Port of Chabahar in Iran in order to allow Indian goods to be exported to Iran, with the possibility of onward connections to Afghanistan and Central Asia.

• In June 2017, India and Afghanistan had launched an air freight corridor between the two countries to boost trade as Pakistan has been refusing land transit access through its territory for trade.

• Chabahar Port is a seaport in south-eastern Iran.  Its location lies in the Gulf of Oman.

• It can be easily accessed from India's western coast, bypassing Pakistan.

• Located close to Afghanistan and other central Asian countries including Turkmenistan and Uzbekistan, the port has also been called as the Golden Gate to these land-locked countries.

• The port was partially built by India in the 1990s to provide access to Afghanistan and Central Asia, bypassing Pakistan under the Ashgabat Agreement.

What is the significance of the port?

• It is the only Iranian port with direct access to the Indian Ocean.

• Developing the port will provide India an alternative access to trade with Afghanistan.

• It will help reduce transportation costs, which will in turn allow India to import crude oil, urea and dry fruits at lower prices.

• It will also reduce land-locked country Afghanistan’s dependence on Pakistan for sea-access and thus, lower Pakistan’s strategic hold on Afghanistan.

• It will also provide India access to the Middle East and Gulf countries increasing trade and ties.