India strongly condemned the acts of destruction and desecration at the holy Nankana Sahib Gurudwara in Pakistan, which left many Sikhs stranded inside. 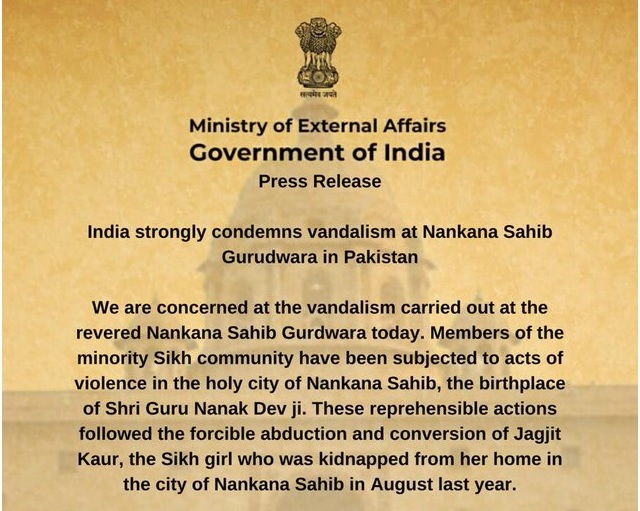 India released an official statement on January 3, 2020, strongly condemning the acts of destruction and desecration at the holy Nankana Sahib Gurudwara in Pakistan, which left many Sikhs stranded inside.

India also urged the Pakistani government to take all measures to protect and preserve the sanctity of the holy Nankana Sahib Gurudwara and its surroundings. Punjab Chief Minister Captain Amarinder Singh also urged Pakistani Prime Minister Imran Khan to immediately intervene and ensure safe rescue of the Sikh devotees stranded inside Nankana Sahib Gurudwara and save the holy place from the mob surrounding it.

The Indian Ministry of External Affairs released the statement after a group of Muslim residents of Nankana Sahib pelted stones at Gurudwara Nankana Sahib on January 3, 2020. The angry mob surrounded the Gurudwara and about 30 Sikh were stuck inside. The situation continued to be tense in the area.

India expressed concern over the vandalism carried out at the revered Nankana Sahib Gurdwara in Pakistan, stating that members of the minority Sikh community in the holy city of Nankana Sahib, the birthplace of Shri Guru Nanak Dev ji have been subjected to acts of violence.

The violence comes a day after the Sikh community celebrated Guru Gobind Singh Jayanti on January 2, 2020. As per the reports, the violence was instigated by the family of a Muslim boy, who had allegedly abducted and forced a Sikh girl Jagjit Kaur to convert into Islam in August 2019.

The Sikh community had opposed the alleged forced conversion and this was resented by the local Muslims.

The Gurudwara Nankana Sahib is located in Nankana Sahib district in Pakistan’s Punjab province. The gurudwara and the place is very significant for the Sikhs, as their first Guru- Guru Nanak Dev was born there in 1469.