India has successfully test-fired air-to-air missile Astra from Sukhoi-30 MKI. The indigenously developed missile was tested off the coast of Odisha on September 17, 2019.

Astra missile is capable of engaging targets of different ranges and altitudes including short and long-range targets. The state-of-art-missile was launched by the Indian Air force as a part of user trials from Sukhoi-30 MKI.

Astra missile completed its test with success, as it was able to accurately engage the live aerial target. The mission took place as planned. Various radars including Optical Tracking System (EOTS) and sensors were able to successfully track down the missile and confirm its engagement with the live target.

The test was conducted by India’s Defence Research and Development Organisation (DRDO). Union Defence Minister Rajnath Singh congratulated DRDO and IAF teams for the successful completion of the test. 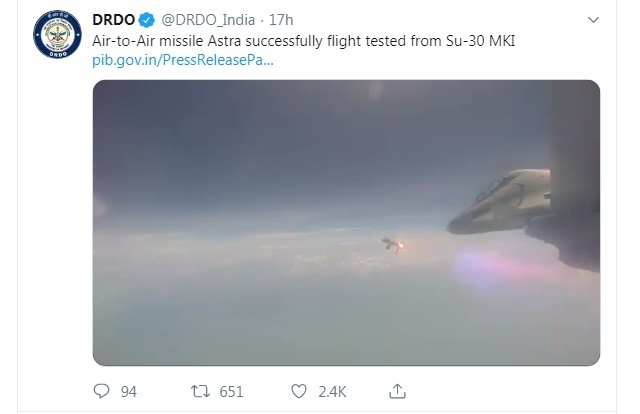 Astra missile is India’s first indigenous air-to-air and beyond visual range missile. The missile can engage targets of different ranges and altitudes

Astra missile has a strike range of over 70 km. It can fly towards its target at a speed of over 5,555 km per hour.

The missile carries a 15-kg high-explosive pre-fragmented warhead. It will be integrated on MiG-29, Mirage-2000 and LCA Tejas aircraft.

The missile has been designed and developed by DRDO along with 50 other public and private organisations, which were involved at various stages of its development.