India and Tunisia have jointly agreed to enhance cooperation in various sectors including in the fields of renewable energy, infrastructure, transport and automobiles, textiles, agriculture, drugs & pharmaceuticals, healthcare, ICT, SMEs and energy. 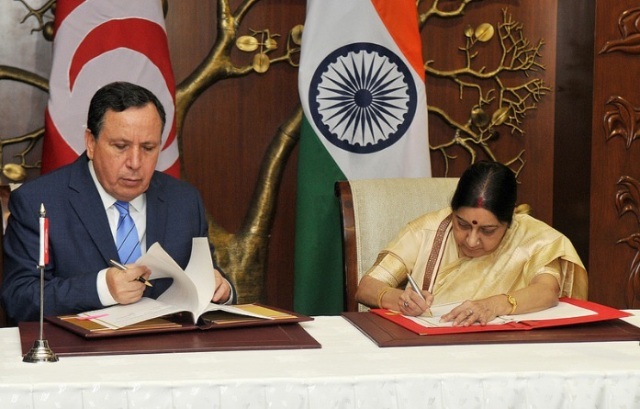 India and Tunisia on 30 October 2017 jointly agreed to enhance cooperation in various sectors including in the fields of renewable energy, infrastructure, transport and automobiles, textiles, agriculture, drugs & pharmaceuticals, healthcare, ICT, SMEs and energy.

The nations also agreed to jointly combat terrorism and extremism while boosting cooperation in the field of security.

The agreements were signed during the 12th Session of the India-Tunisia Joint Commission, which was held in New Delhi on 30 October. While External Affairs minister Sushma Swaraj led the Indian delegation at the meeting, the Tunisian delegation was headed by Khemaies Jhinaoui, Minister of Foreign Affairs of Tunisia.

• This was the first time India-Tunisia Joint Commission Meeting (JCM) was held at the Foreign Ministerial level.

• The meeting enabled a comprehensive review of bilateral ties between India and Tunisia and also detailed discussions on how to strengthen them further.

• The two sides have also come with a roadmap for India-Tunisia partnership to give a new thrust to bilateral relations.

• India signed a MoU with Tunisia for establishment of Soil, Water and Tissue Testing Laboratory in Tunis.

• Tunisia shared India’s concerns on terrorism and agreed to fight against terrorism, extremism, radicalism, drugs and organized crime and cooperate in the field of security including cyber security.

-  JWG on Trade: To remove barriers in trade and expand volume and range of trade

- JWG on Agriculture: To expand cooperation in agriculture and agro products.

• Six agreements in the fields of Judicial Cooperation, Cooperation in Youth Matters, ICT, Trade and Business were also signed.

• Tunisia also announced that it would become a partner country in the International Solar Alliance (ISA) and expressed its willingness to join its various programmes.

Besides this, the Foreign Ministries of the two nations have decided to hold a year-long Festival of India in Tunisia and Festival of Tunisia in India in 2018 to celebrate the 60th Anniversary of the establishment of diplomatic relations between the two countries.