Here is a list of records broken by Rohit Sharma and Shikhar Dhawan against Australia during a world cup match. 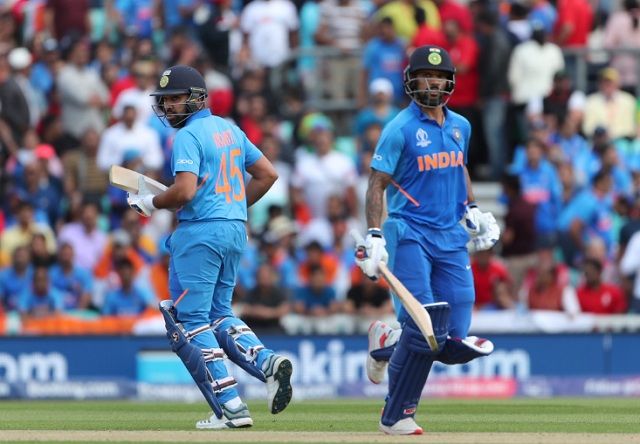 India’s magnificent win over Australia during Match 14 of the ICC World Cup 2019 was led by breaking of many world cup records, especially against Australia. The Indian players finished at the top by surpassing many of the world cup records created earlier by veteran cricketers.

Following is the list of the some of the key world cup records that were broken by India during India vs Australia world cup 2019 match:

Rohit Sharma surpassed Sachin Tendulkar’s world cup record by becoming the fastest batsman to make 2000 ODI runs against Australia. Sharma reached the 2000-run mark in just 37 innings, while Tendulkar had achieved the same feat in 51 innings. The Indian opener broke the world record during India’s ICC World Cup 2019 match against Australia at the Oval on June 9.

3. India’s total of 352/5 highest against Australia in a world cup match

Australia’s Sunday loss against India at the Oval is their first world cup loss while chasing, since 1999. The mighty Australians hadn’t ever lost a world cup match while batting second in the past two decades. Their last defeat in a world cup chase had come against Pakistan during a league match of the 1999 Cricket World Cup, when they had lost by 10 runs in Leeds.

The Indian pair of Shikhar Dhawan and Rohit Sharma became the most successful opening pair against Australia in ODIs during India vs Australia, Match 14 of World Cup 2019, surpassing West Indies pair of Gordon Greenidge and Desmond Haynes. The Indian openers took seven innings less to cross the total of 1152 runs set by the West Indies stalwarts.

The Indian opening duo of Rohit Sharma and Shikhar Dhawan also made the record of setting up the highest opening stand for India against Australia in world cup history. Sharma and Dhawan added record 127 runs for the first wicket before Coulter-Nile got Sharma out at 57. The opening pair surpassed their own previous record of 76-run partnership, which was made by them during the 2015 edition of the world cup.