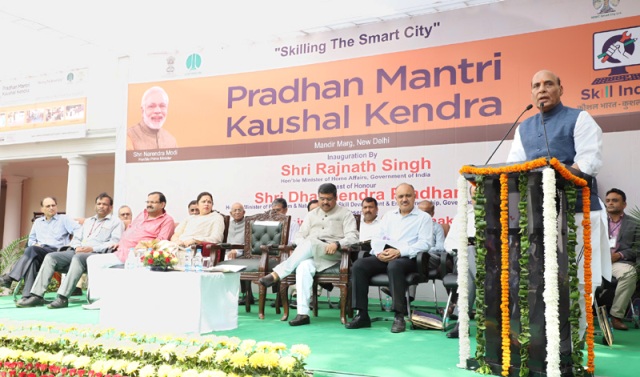 The inauguration was done in collaboration with New Delhi Municipal Council (NDMC). The main aim behind the development is to bring momentum in skilling through collaborative efforts.

The ministers also laid the foundation for a Skill Development Centre at Moti Bagh and a Centre of Excellence at Dharam Marg in New Delhi. The new skill development centres emphasise on the commitment of the Union Government to support skilling in smart cities.

- For setting up of PMKK Centres for Smart Cities

While inaugurating the skill development centres, Rajnath Singh said, “India which has the privilege of being a young nation, would gain from this demographic dividend to become a superpower and be amongst the top three counties in the world by 2030. The key to reach this milestone is by investing in our youth and making them skilled.”

The minister further added, “a skilled person gets respect, recognition and honour due to his hard work. I strongly believe that these skill development centres would aspire youth to take up vocational training to make themselves self-reliant.”

The initiative is an essential step forward towards the success of Prime Minister Narendra Modi’s Skill India Mission and the Smart City Mission.

It is an exemplary heritage building, having a capacity of skilling 4,000 youth annually.

The centre would cater to healthcare and solar energy sectors.

It will be managed by one of NSDC’s affiliated training partners - Orion Edutech, which has a notable record of training nearly 3 lakh candidates through its network of over 275 skill development centres across the country.