Qasem Soleimani, the head of Quds Force, was killed during a US drone strike on January 3, 2020. 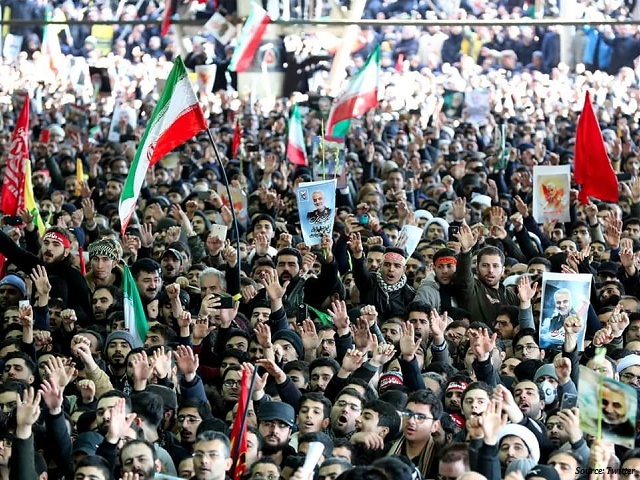 Iran designates US forces as terrorists

Iran’s parliament passed a bill designating all forces of the United States as terrorists on January 7, 2020. The move comes after the US forces killed top Iranian military commander Qasem Soleimani in a US airstrike.

Qasem Soleimani, the head of Quds Force of Iran's Islamic Revolution Guards Corps, was killed during a US drone strike outside Baghdad airport on January 3, 2020. The strike attracted strong reactions from Iran, which announced that it will not limit itself to the restrictions set under the 2015 Nuclear deal.

The incident has escalated tensions between the US and Iran with both releasing threatening statements. The UN Secretary-General appealed to both sides to exercise calm and see that war is not a solution. The attack has raised fears of a possible World War III.

• Iran’s new bill designates all US forces along with the employees of the Pentagon and its affiliated organizations including all agents, commanders and those who ordered the killing of Soleimani as "terrorists".

• The bill stated that any aid provided to these forces including military, intelligence, financial, technical, service or logistical will be considered as cooperation in a terrorist act.

• During a parliamentary meeting in Iran’s capital city Tehran, all Iranian MPs chanted "death to America".

• The parliament members also voted to bolster the funds of the Quds Force by 200 million euros. The Quds force is the foreign operations arm of Iran's Revolutionary Guards, which was headed by Soleimani.

• The new bill is an amended version of a law, which was adopted in April 2019 that declared the United States as a "state sponsor of terrorism" and its forces in the region as "terror groups".

According to Iran’s top security body, the Supreme National Security Council, the designation came after the US designated Iran's Revolutionary Guards as a "terrorist organisation".

The precision drone strike was ordered by US President Donald Trump to eliminate Soleimani, who according to the US was plotting imminent attacks on American diplomats and military personnel.

Iran responded to Soleimani’s slaying by announcing that it will no longer limit itself to the restrictions set by the 2015 Nuclear Deal under the Joint Comprehensive Plan of Action (JCPOA). Iran also vowed to retaliate against the attack with a military response against military sites.

Trump responded to the threat by warning that if Iran strikes any Americans or American assets then the US will target 52 significant Iranian sites. The United States is also deploying 3,500 additional troops to the Middle East following the attack.

A sea of people gathered to mourn the slain leader Qasem Soleimani, when his body arrived in his hometown Kerman on January 6, 2020. The massive turnout, almost a million, during the funeral procession led to stampede and killing of 35 people and injuring 48 others.

Who was Qasem Soleimani?

Qasem Soleimani was the head of the Quds force, the foreign branch of the Revolutionary Guards. He was internationally known as a hardliner and a dominant force in Iran.

Soleimani had supported Syria's President Bashar al-Assad during the country's civil war and also aided the Shia militant group Hezbollah in Lebanon. He had also played a primary role in guiding the Iraqi militia groups against the Islamic State group.

The US blamed the Revolutionary Guard Corps for the deaths of US personnel in Iraq and the Middle East and for providing weapons to terrorist groups.