Babulal Marandi of JVM is ahead of Rajkumar Yadav from Dhanwar Assembly constituency. On the other hand, Raghubar Das of BJP may showcase its charisma once again as no party has got a clear majority in early trends. 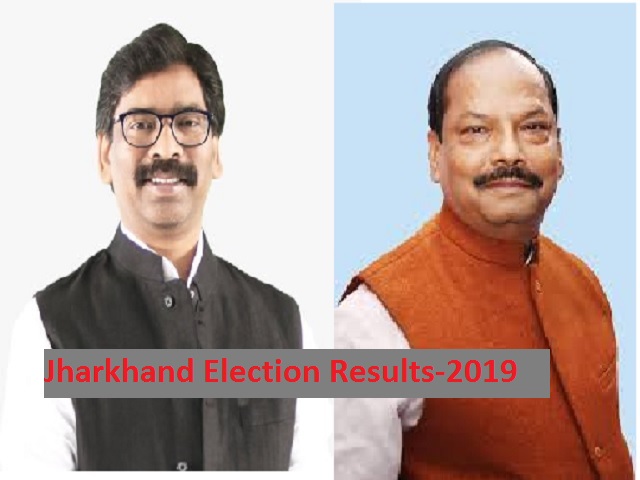 Jharkhand Election Results 2019 Updates: As per the early trends, no party has received the majority as the trends are changing quite rapidly. Chief Minister Raghubar Das is leading from Jamshedpur East, Hemant Soren, executive president of JMM and leader of coalition in elections, is leading from Dumka seat.

The Grand Alliance includes Congress, Jharkhand Mukti Morcha (JMM) and Rashtriya Janata Dal (RJD). The alliance has contested elections under the leadership of JMM leader Hemant Soren. On the other hand, BJP is contesting elections on their own because JDU and LJP are contesting without an alliance.

Jharkhand Election Results 2019 Updates @ 11.16 am:  According to the Election Commission, BJP candidate Louis Marandi is leading from Dumka by over 6,000 votes.

Jharkhand Election Results 2019 Updates @ 9.16 am: Ramdev Singh Bhokta of Jharkhand Vikas Morcha (JVM) is ahead of Simaria assembly constituency while Satyanand Bhokta is leading in Chatra.

Jharkhand Election Results 2019 Updates @ 9.00 am: Tight security arrangements have been made at the counting centers. The fate of 1,215 candidates will be decided today.

Jharkhand Election Results 2019 Updates @ 8.44 am: Hemant Soren is leading from both the seats. According to the trends so far, BJP is leading in 14, Congress + 28 and other leading on 6 seats.

Jharkhand Election Results 2019 Updates @ 8.29 am: Exit polls have predicted a definite advantage for the Congress-JMM-RJD alliance.

Raghuvar Das is currently the Chief Minister of Jharkhand. He is MLA from Jamshedpur in Jharkhand. He contested from Jamshedpur East seat in the 2014 elections on a BJP ticket. He was elected by defeating Indian National Congress candidate Anand Bihari Dubey by a margin of 70157 votes. He was born on May 3, 1955, in Jamshedpur. He became a member of the Janata Party in 1977 and came to active politics with the establishment of BJP in 1980. He is contesting from Jamshedpur East.

Hemant Soren was the 5th Chief Minister of the Jharkhand. He is the executive president of Jharkhand Mukti Morcha (JMM). This time he has announced his candidacy from two constituencies – Dumka and Barhet. Earlier, he was the Deputy Chief Minister in the Arjun Munda cabinet. He is the son of former Jharkhand CM Shibu Soren.

Babulal Marandi was the first Chief Minister of Jharkhand in 2006. He later formed the Jharkhand Vikas Morcha (JVM) and serving as its president. He is contesting from Dhanwar. Marandi was also the Member of Parliament (MP) in 12th, 13th, 14th and 15th Lok Sabha from the state.

Sudesh Mahto is the president of All Jharkhand Students Union (AJSU) contesting elections from Silli assembly constituency. He became the Deputy Chief Minister of Jharkhand in 2009 while he won first elections in 2000. Mahto also runs Birsa Munda Archery Academy in his constituency Silli that received the President award in 2016.

Former IPS officer Rameshwar Oraon is a Congress candidate from Lohardoga constituency. Rameshwar is also the state president of the Congress party. Earlier, he was posted as Additional Director General of Police in Jharkhand but resigned in 2004 to contest the Lok Sabha elections.

It would be interesting to look at the results of Lohardoga's constituency because it has become a battle of bureaucrats. Sukhdeo Bhagat is contesting from this seat on BJP’s ticket. He was deputy collector before entering into politics. Earlier, he was a member of the state congress party but later joined the BJP.