President’s rule came into force in Jammu Kashmir from the midnight of December 20, 2018, following the expiry of the six-month-long governor's rule. President Ram Nath Kovind signed the proclamation paving the way for imposition of central rule in the state, which was placed under the Governor’s rule on June 20.

President’s rule came into force in Jammu Kashmir from the midnight of December 20, 2018, following the expiry of the six-month-long governor's rule.

President Ram Nath Kovind signed the proclamation paving the way for imposition of central rule in the state, which was placed under the Governor’s rule on June 20 after the BJP withdrew support to the PDP government led by Mehbooba Mufti.

The proclamation was signed after the Union Cabinet headed by Prime Minister Narendra Modi approved the decision on December 17, 2018. After the proclamation, the powers of the legislature of the state shall be exercisable by or under the authority of Parliament.

The Jammu and Kashmir Governor Satya Pal Malik had on November 21, 2019 dissolved the State Assembly with immediate effect after rival alliances staked claim to form the government.

• The governor released the communiqué of dissolution minutes after People’s Democratic Party (PDP) leader and former chief minister Mehbooba Mufti released a letter on Twitter announcing that she would seek to form the government with her traditional rivals, the National Conference (NC) and Congress.

• The former Chief Minister and PDP President, Mehbooba Mufti staked claim to form the government in the state by saying that her party, which is the largest party in the assembly with 29 MLAs, had the backing of 15 lawmakers of National Conference and 12 of Congress.

• Earlier, both NC and Congress had demanded the dissolution of the assembly to avoid horse-trading and possible poaching of legislators amid the emergence of the Lone-led front.

• The majority mark required to form the government in the state’s 87-member assembly is 44. 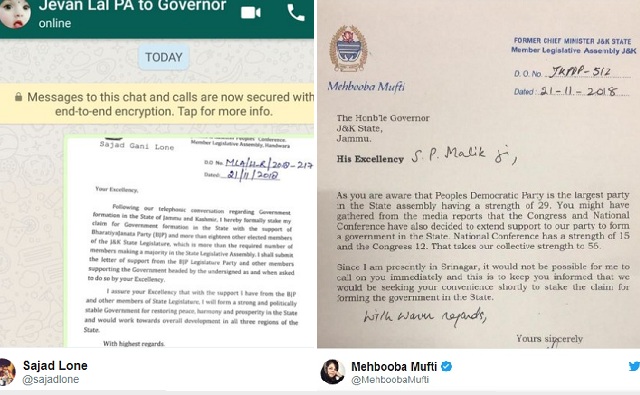 • The Governor's rule was imposed in the state on June 19 for a 6-month period following the collapse of the PDP-BJP coalition government after the BJP withdrew its support.

• Since the state has a separate Constitution, in such cases, six months of Governor’s rule is compulsory under Article 92 of the Jammu and Kashmir Constitution, under which all the legislature powers are vested with the Governor.

• The state assembly was kept in suspended animation so that political parties could explore the possibility of forming a new government.

• The six-month tenure of the Governor's rule is scheduled to end on December 18, after which the state will be put under the President’s rule till it goes into polls.

• The Governor has decided to hold elections at an appropriate time so that a government with a clear mandate is formed.