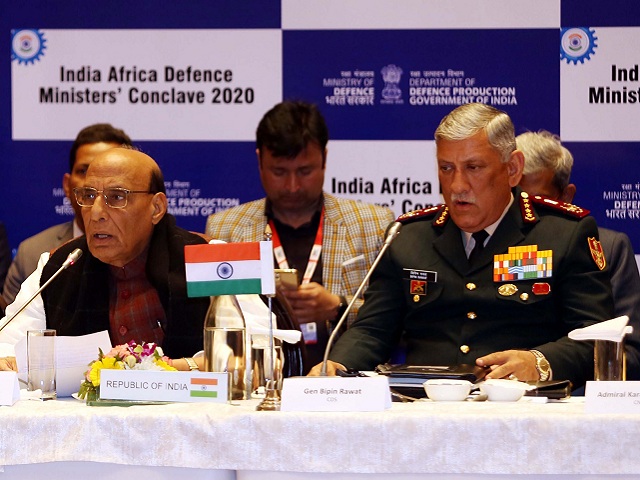 India and African nations adopted the ‘Lucknow Declaration’ during the first India-Africa Defence Minister’s Conclave on February 6, 2020. The conclave was held on the sidelines of the 11th edition of the biennial defence exhibition, DEFEXPO India 2020.

The ‘Lucknow Declaration’ was adopted in the presence of Union Defence Minister Rajnath Singh and his counterparts from 12 African nations and heads of delegations from 38 other African countries.

Overall, 50 African nations signed the declaration along with India at the conclave, which was organized for the very first time.

The leaders recalled India’s contribution to defence and security in Africa through setting up of various Defence Academies in countries like Tanzania, Nigeria and Ethiopia and deployment of training teams in several African nations including Uganda, Botswana, Lesotho, Namibia, Zambia, Seychelles, Mauritius and Tanzania.

The leaders also recalled India’s provision of defence equipment and ammunitions and other measures including conducting Defence Training Programmes.

They also acknowledged the humanitarian assistance provided by the Indian defence force’s and its disaster relief operations during major disasters including cyclone IDAI in Mozambique (2019) and mass evacuation of stranded people from 41 countries in 2018.

The leaders also appreciated the initiation of Africa India Field Training Exercises and agreed to further strengthen cooperation in defence preparedness and security. The first-ever AFINDEX was held in March 2019.

The African Union leaders further agreed to strengthen their cooperation with India in enhancing peacebuildingg efforts including support to the African Standby Force (ASF) through courses and peacekeeping training centres in Africa.

The African leaders also underlined the need for greater involvement of Troop Contributing Countries, who are the members of the UN, not only in peacekeeping training but also in the decision-making process.

They recognised various common security challenges such as terrorism and extremism, organised crime including human trafficking, piracy, transnational crime, drug trafficking and weapon smuggling and agreed to fight against them together and ensure no territory under their control is used to launch terror attacks on other nations.

The leaders also called for the strengthening of the UN Counter-Terrorism mechanisms and ensure strict compliance with the UN Security Council sanctions on terrorism. They also urged the international community to look into adopting the Comprehensive Convention on International Terrorism in the UNGA.

The leaders recognized the importance of the oceans to the livelihood of their people and stated that maritime security is very important to ensure the development of a blue economy. The leaders sought to increase their cooperation in preventing maritime crimes, disaster, piracy, unregulated fishing and securing sea lines of communication through regular information exchange and surveillance.