Google’s doodle on 15 November 2017 paid tribute to Cornelia Sorabji, India’s first female advocate, on the occasion of her 151st birth anniversary. Sorabji was the first woman to graduate in law from India in 1892 and the first Indian national to attend a British University. 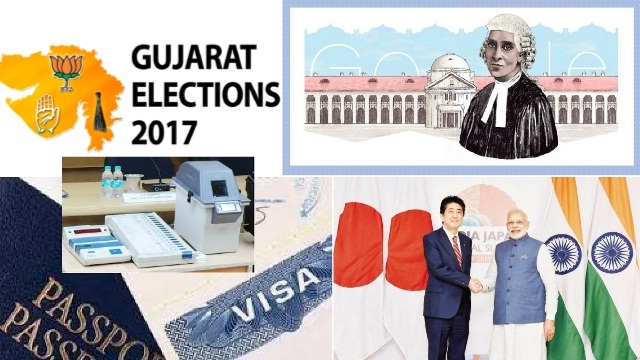 Sorabji was the first woman to graduate in law from India in 1892 and the first Indian national to attend a British University, when she began her law studies at Oxford. Despite completing her education in 1894, Sorabji was not allowed to plead in courts in England or India.

Jasjyot Singh Hans created the Google doodle with Sorabji in front of the Allahabad High Court, where she started her career as pleader.

Japan to relax visa regime for Indians from 1 Jan

Japan will relax its visa rules for Indians from 1 January 2018 and issue multiple- entry-visa for short-term stay.

The move is expected to benefit tourists and business persons as well as repeat visitors. The relaxed visa regime will not only have simplification of visa application documents but also expansion of scope of eligible applicants.

Under the simplification of visa application documents, the applicant’s employment certificate and explanation letter stating the reason will be exempted in cases of applying for multiple-entry-visa.

The notification for the first phase of two-phase Gujarat Assembly elections was issued on 14 November 2017.

In the first phase, elections will be conducted in 89 of the 182 Assembly constituencies of Gujarat on 9 December 2017. In total, 19 districts of Saurashtra, Kutch and South Gujarat will be covered in the first phase of elections.