Zimbabwe's President Robert Mugabe has resigned, bringing an end to 37 years of rule and sparking jubilant celebrations in the nation's streets. Until his resignation, Mugabe was the world's oldest head of state. 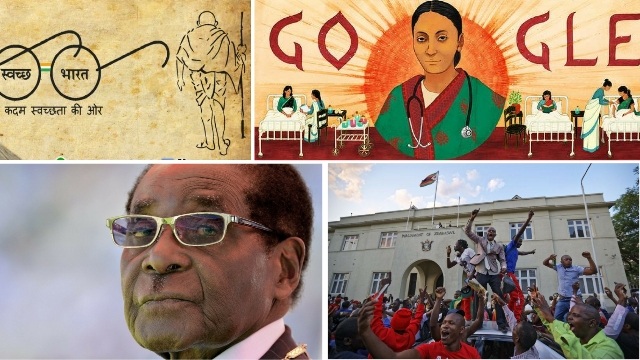 Zimbabwe's President Robert Mugabe resigned on 21 November 2017, bringing an end to 37 years of rule and sparking jubilant celebrations in the nation's streets.

The 93-year-old leader's resignation letter was read out by the speaker of Parliament, whose members had gathered to impeach Mugabe after he ignored escalating calls to quit since a military takeover. In the letter, Mugabe, who had so far resisted pressure from everyone around to step down, said that his decision was voluntary and he had done so to enable a smooth and non-violent transfer of power.

Until his resignation, Mugabe was the world's oldest head of state. Previously fired Vice-President, Emmerson Mnangagwa, is likely to take over as the new President of the nation within 48 hours.

Google’s doodle on 22 November 2017 commemorated the 153rd birth anniversary of Rukhmabai Raut, who was the first Indian woman to practice medicine in British India.

The doodle depicts the courageous doctor among her patients, doing the dedicated work of a skilled physician. Rukhmabai is also known to be the first woman who stood against the practice of ‘Hindu Marriage’.

Rukhmabai was married to Dadaji Bhikaji without her consent at an early age of 11, as child marriage was a common practice at those times in the country. Though she was allowed to complete her education, her husband Dadaji Bhikaji Raut gradually forced her to live with him.

The two-day National Consultation of Swachh Iconic Places (SIP), an initiative of Ministry of Drinking Water and Sanitation under Swachh Bharat Mission began in New Delhi on 21 November 2017.

Representatives from 20 Iconic Sites including central and State officials, representatives of iconic places and Corporate and development partners including World Bank joined the consultations.

Initiated as a project to implement Prime Minister’s vision to take iconic places and their surroundings to higher standards of Swachhata, so that all visitors benefit and also take away home the message of cleanliness, Swachh Iconic Places is now in its second phase.