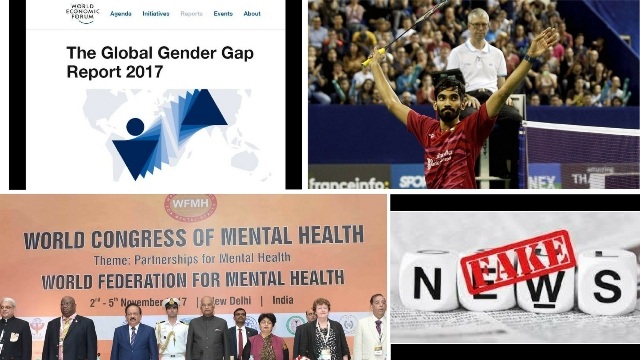 The 21st World Congress of Mental Health was inaugurated by President Ram Nath Kovind in New Delhi on 2 November 2017.

The conference was organised by the World Federation for Mental Health in partnership with Caring Foundation and other institutions. Speaking on the occasion, the President said that the World Congress of Mental Health is taking place in India for the first time and it has come here at an appropriate moment.

He grabbed the No. 2 ranking after jumping two places in the latest BWF rankings. He was previously placed 4th behind Korea’s Son Wan Ho and China’s Lin Dan, both of whom have slipped down by 1 position.

Srikanth, who reached five finals, has clinched four titles this year so far.

The WEF measures the gender gap based on four pillars - health, education, workplace and political representation. The report attributed India's decline in position to a widening of gender gap in political empowerment as well as healthy life expectancy and literacy.

India's latest ranking is 10 spots below its reading in 2006 when the WEF started measuring the gender gap.

Fake news, a term heavily popularised by US President Donald Trump, has been named the word of the year by Collins dictionary due to its widespread use around the world.

Defined as "false, often sensational, information disseminated under the guise of news reporting", fake news takes over from Brexit, which was named the definitive word last year after the June 2016 referendum that decided the fate of UK-EU relationship, calling for UK to exit the European Union.