The Union Government’s decision of demonetising the currency notes of Rs 500 and Rs 1000 completed one year today. Exactly one year ago, Prime Minister Narendra Modi had declared the use of all 500 and 1000 banknotes of the Mahatma Gandhi Series as invalid past midnight. 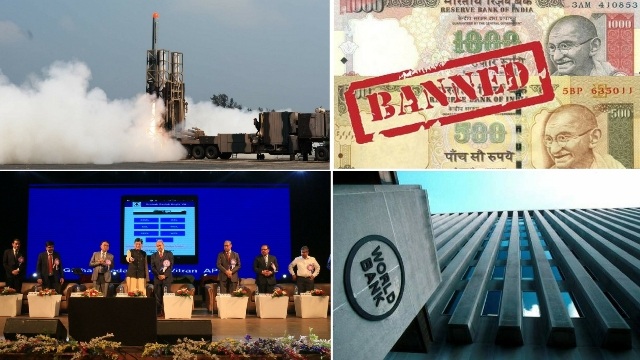 The Union Government’s decision of demonetising the currency notes of Rs 500 and Rs 1000 completed one year on 8 November 2017.

According to the Government, the measure has succeeded in curtailing the shadow economy and crack down on the use of illicit and counterfeit cash to fund illegal activity and terrorism.

India on 7 November 2017 signed a loan agreement worth US$ 119 million with the World Bank for the ‘Odisha higher education programme for excellence and equity project’.

The main objective of the deal is to improve the quality of students’ equitable access to selected institutions and enhance governance of the higher education system in Odisha.

The app, which was launched during Coal India’s Foundation day, aims to achieve transparency in dispatch operations. Its other benefits include easy accessibility of the information, helpful in logistics planning for lifting of coal in tune with the loading programmes and further, it helps in improved planning of procurement, production and stock management by the customers.

The missile can be deployed from multiple platforms. It has the capability to cruise at altitudes as low as 100 m. The flight test achieved all the mission objectives completely from lift-off till the final splash. The missile was tracked with the help of ground based radars and other parameters were monitored by indigenous telemetry stations developed by DRDO.