National Geoscience Awards: The Young Scientist Award-2018 was awarded to Dr. Sohini Ganguly for her significant work in the fields of volcanology, geochemistry and petrology. 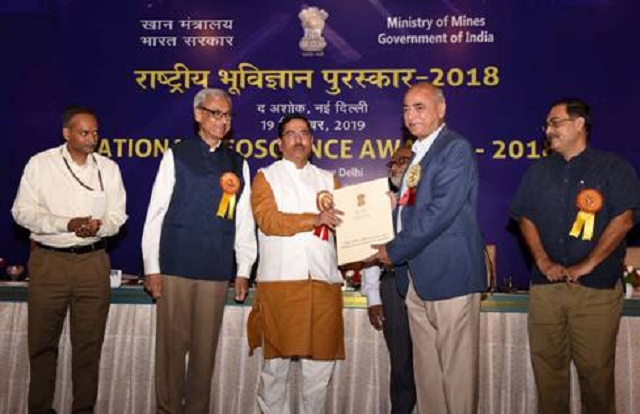 The Award for Excellence was conferred to Prof. Syed Wajih Ahmad Naqvi from Council of Scientific and Industrial Research (CSIR) for his significant global contributions in the field of aquatic biogeochemical research.

The Young Scientist Award-2018 was awarded to Dr. Sohini Ganguly from Goa University for her significant work in the fields of volcanology, geochemistry and petrology.

Speaking on the occasion, Pralhad Joshi said that strengthening the synergy between the professional and academic institutions working in field of geosciences is the need of the hour. The Union Minister also called upon the geoscientific community to come up with innovative ways to discover concealed mineral resources while causing least ecological disturbance. He said that the Government aims to increase mineral production (in value terms) by 200 percent in 7 years.

National Geoscience Awards: Everything you need to know!

The annual National Geoscience Awards are conferred in three categories:

1. National Geoscience Award for Excellence: The award is conferred to recognise outstanding lifetime achievements and contributions by geoscientists, engineers, technologists and academicians for contribution in the field of Geosciences. The award carries a cash prize worth Rs 500,000/-, a certificate, a citation and a trophy.

3. Young Researcher Award: The award is conferred to a researcher or scientist who is below the age of 30 years on December 31 of the year of the award to recognize his/her research work in the field of geosciences. The award carries a cash prize worth Rs 50,000, a certificate, citation and a trophy.

Any Indian citizen who is a professionally qualified geo-scientist, engineer, technologist or academician with significant contribution in any of the field specified in Clause 3 of the regulation shall be eligible for the National Geoscience Awards.