NavIC in Realme X50 Pro? Company claims to be first in the world to use ISRO’s technology

Xiaomi India’s Managing Director recently announced an agreement with ISRO to use India’s own navigation system.

NavIC in News: Realme and Redmi phones have been in a neck and neck competition to use ISRO’s NavIC technology. Realme and Xiaomi have claimed that they are going to launch a new range of smartphones with ISRO’s NavIC, which is known as India’s navigational system.

Realme CEO Madhav Seth tweeted on February 27, 2020, that Realme X50 Pro 5G will be available with NavIC as India’s first smartphone with ISRO’s navigation technology. On the other hand, Xiaomi India’s Manu Kumar Jain tweeted that Redmi phone will be the world’s first to use ISRO’s navigational system NavIC.

Manu Kumar Jain, Xiaomi India’s Managing Director recently announced an agreement with ISRO to use India’s navigation system. Manu Kumar Jain confirmed through a tweet that the upcoming Redmi phone will be the world’s first smartphone that will use ISRO’s NavIC technology. Jain also announced that the next Xiaomi and Redmi phones will be equipped with ISRO’s NavIC technique. 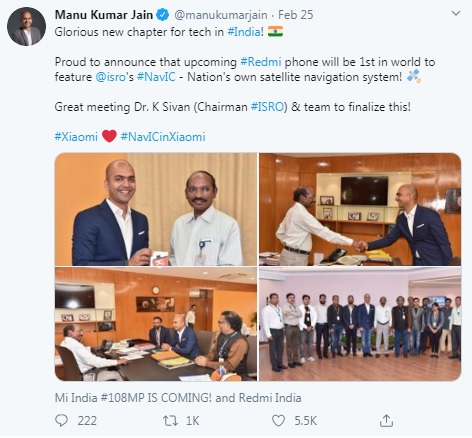 According to the media reports, NavIC will provide much better navigation system than the traditional GPS. Since it will be covered by an Indian satellite, there will be lesser chance to break the signals and network problems. 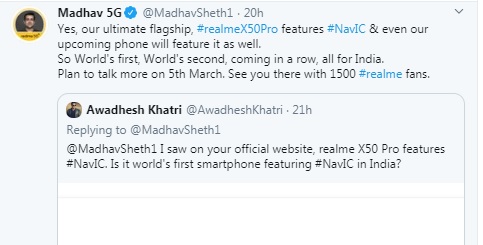 • Indian Regional Navigation Satellite System (IRNSS) or NavIC has been developed by ISRO – Indian Space Research Organisation. ISRO has designed the NavIC for Indian users as well as the extending ability up to 1500 km from its boundary.
• NavIC provides accurate and real-time navigational service through its technical abilities.
• Currently, it has been designed for India only but it can provide its services up to 1500 km around its path.
• NavIC uses dual-band frequency while traditional GPS uses single-band frequency.

Some applications of NavIC

According to the official website of ISRO, IRNSS or NavIC can be used for Terrestrial navigation aid for hikers and travelers, Terrestrial, Aerial and Marine Navigation, Vehicle tracking and fleet management, Mapping and Geodetic data capture, visual and voice navigation for drivers, Disaster Management and Precise Timing.