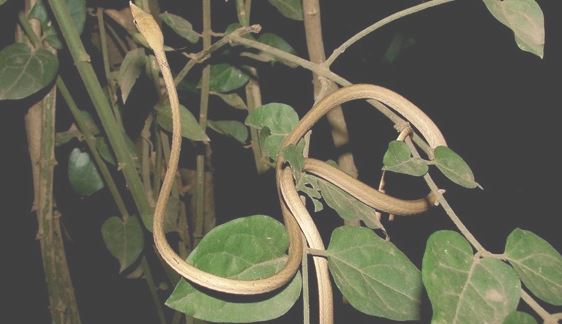 •    Scientists took 10 years for completing field and laboratory work to confirm about new species.
•    Vine snake is a slender rear-fanged snake with narrow head, and pointed snouts.
•    Snake is from Colubridae family, it has three prominent genera – Oxybelis found in American continent, Thelotornis found in Africa and Ahaetull, which is found in India and Southeast Asia.
•    Scientists conducted molecular analysis that proved that the earlier samples were related to a unique species. Scientists found it genetically distinct from green vine snakes.
•    After reviewing all the literature pertaining to the brown coloured vine snakes from India and after cross-validating with two old collections of brown vine snakes from Rajasthan, the team was convinced it had discovered of a new species.
•    Their eyes have pupils that look like horizontal keyholes.

Victor Vescovo (53 years old) broke the world record for the deepest dive in history. US citizen Vescovo is a under-sea explorer who dove about 6.8 miles to a point in the Pacific Ocean's Mariana trench.

It was the third time humans have dived to the deepest point in the ocean, known as Challenger Deep. His dive went 52 feet (16 meters) lower than the previous deepest descent in the trench in 1960.

•    Vescovo took his Pressure Drop submersible to 10,927 meters (35,853 feet) below the surface of the Pacific Ocean in the Challenger Deep part of the Mariana Trench, breaking Don Walsh and Jacques Piccard's depth record set in 1960.
•    Vescovo set another record by becoming the first and only person who visited highest and deepest point of the world. He had climbed mount Everest also.
•    He also made discovery about undiscovered species of sea life ranging from shrimp-like arthropods with long legs and antennae, sea pigs similar to a sea cucumber.
•    He also found angular kind of plastic object at the bottom of Mariana Trench. 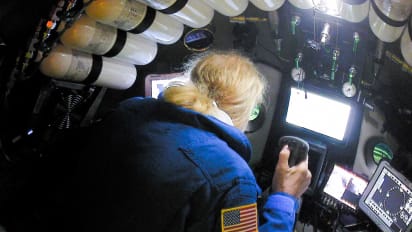 •    The Mariana Trench is located in the western Pacific Ocean about 200 kilometres east of the Mariana Islands, and has the deepest natural trench in the world.
•    In 2009, the Marianas Trench was established as a United States National Monument.
•    It is a crescent-shaped trough in the Earth's crust averaging about 2,550 km (1,580 mi) long and 69 km (43 mi) wide. The maximum known depth is 10,994 metres.
•    If Mount Everest were dropped into the trench at deepest point, its peak would still be over two kilometres under water.