Striders are small insects that are adapted for life on top of still water, using surface tension to their advantage so that they can walk on water. 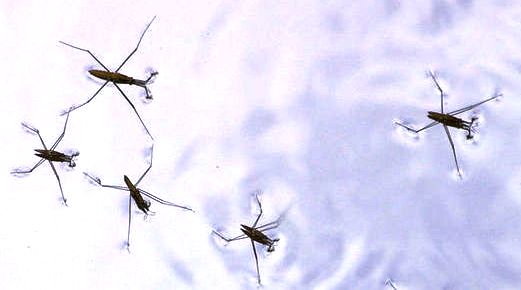 A team of scientists from the Zoological Survey of India (ZSI) have discovered the new species of water strider named ‘Ptilomera Nagalanda Jehamalar and Chandra’ from Intangki River in Peren district of Nagaland.

The species is named after the Nagaland state itself. The findings were published in Zootaxa Journal in January 2018.

• The new species ‘Ptilomera nagalanda Jehamalar and Chandra’ can be easily differentiated from all the known striders through the absence of curly and tangled dark brown swimming setae and the presence of silvery setae on the sublateral region of the meso and metanota of the male.

• This particular species is orange in colour with black stripes on the dorsal (back) side and has a pale yellowish brown ventral (front) part of the body.

• The presence of black stripes on the dorsal side differentiates this species from other known species of the subgenus Ptilomera.

• There were only five species of water striders under the subgenus Ptilomera in India.

• With the discovery of Ptilomera nagalanda Jehamalar, the number of species of water striders belonging to the Ptilomera subgenus has increased to six.

• Ptilomera subgenus is only found in rocky, fast flowing streams and rivers that are not exposed to a lot of sunlight.

• Ptilomera has hair on the middle legs that help the insects resist the strong current of streams.

• Their front legs are shorter than the mid and hind legs and are used to catch and hold prey.

• Striders are small insects that live on top of still water, using surface tension to their advantage so that they can walk on water.

• With just a half-inch long thin body, the water strider’s secret is its three sets of legs.

• The legs have tiny hairs that keep away water and capture air. The water repelling feature help them to stand on the water surface and the captured air allows them to float and move easily.

• Their presence serves as an indicator of water quality.