One Trillion Trees Initiative: WEF launches initiative to grow one trillion trees by 2030

One Trillion Trees Initiative: The one trillion trees initiative aims to slow down climate change by removing large amounts of carbon dioxide from the atmosphere. 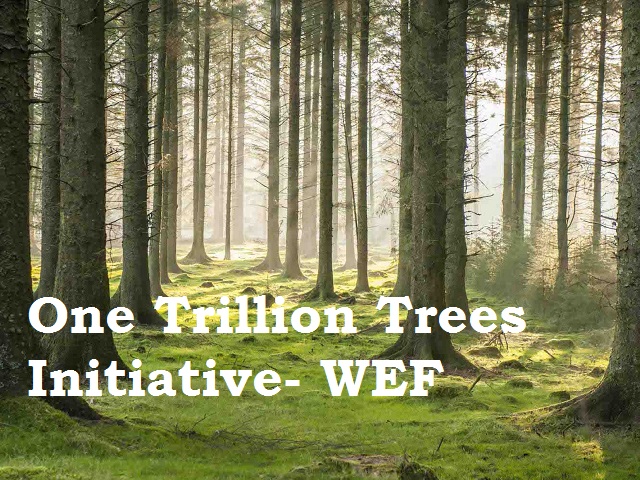 The one trillion trees project is also aimed at uniting governments, non-governmental organisations, businesses and individuals in mass-scale nature restoration.

US President Donald Trump announced that the United States will join the one trillion trees initiative, a day ahead of its official launch. Trump known to be a skeptic of climate change phenomenon stated that the US is committed to show strong leadership in restoring, growing and conserving trees and forests.

• To mobilise funds and political support.

• To plant, restore and conserve trees and forests.

• To lock up carbon in the world’s forests, grasslands and wetlands.

The process of locking up carbon in the world’s grasslands, forests and wetlands will help reduce about one-third of the emissions required to be cut by 2030 to meet the Paris Agreement targets. The remaining emissions reductions could come from the energy, heavy industry and finance sectors.

The WEF launched the one trillion trees initiative after gaining inspiration from a presentation by Swiss ecologist Thomas Crowther at the organization's meeting in 2019. Crowther had highlighted in his presentation that there is enough land to accommodate 1.2 trillion more trees. Currently, the planet has about 3 trillion trees.

Crowther and his team had calculated in July 2019 that planting over 1 trillion additional trees will help cool the earth and reduce atmospheric carbon dioxide concentrations to where they stood a century back.