Pathalgadi is a practice of placing stone plaques with warnings inscribed on them at the entry point of villages. 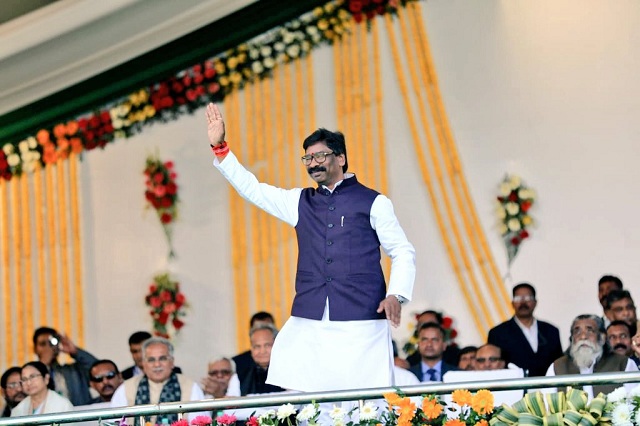 Pathalgadi movement: The newly formed Jharkhand government, in its maiden decision on December 30, 2019, announced the withdrawal of all pathalgadi sedition cases filed against the tribals.

The decision was taken in the first cabinet meeting chaired by the newly sworn-in Jharkhand Chief Minister Hemant Soren. With this, all cases filed related to the Pathalgadi movement of the tribals, filed in 2018 by the previous state government, will be withdrawn.

JMM Working President Hemant Soren had taken oath as the 11th Chief Minister of Jharkhand at the Morabadi Ground in Ranchi on December 29, 2019. Three cabinet ministers were also sworn in along with Soren. The first assembly session of the new government is scheduled to begin on January 6 when all the members of the legislative assembly will be sworn in and the floor test will be held on January 8, 2020.

• Hemant Soren-led coalition government in Jharkhand decided to withdraw all the cases registered against the Pathalgadi movement supporters on its very first day of functioning.

• The coalition government also dropped all the cases registered against those who had opposed the proposed amendments in the Chhota Nagpur Tenancy (CNT) Act and the Santhal Pargana Tenancy (SPT) Act.

• With this, all cases related to the Pathalgadi movement and opposition to proposed amendments in land tenancy laws will be dropped.

• The state cabinet secretary announced that all the FIRs lodged in various police stations will be withdrawn.

What is the Pathalgadi movement?

• The Pathalgadi movement was a separatist movement initiated by the tribal groups in 2017 against the then Raghubar Das government’s decision to amend the land tenancy laws, Santhal Pargana Tenancy (SPT) Act and the Chhota Nagpur Tenancy (CNT) Act.

• Pathalgadi refers to a practice of placing stone plaques with declarations and warning inscribed on them at the entry point of villages.

• The Pathalgadi movement had begun in 2017 when signboards and stone plaques were placed in over 200 villages of Jharkhand.

• The stone plaques, proclaiming allegiance to the Constitution, carried inscriptions dismissing the authority of the centre and state in their villages.

• The plaques declared the village gram sabha as the only sovereign authority and prohibited the entry of outsiders in the villages.

• The stone plaques also carried inscriptions from the Panchayat (Extension to the Scheduled Areas) Act, 1996 or PESA. This was used as a foundation by the villagers to claim their independence from the state and the Central governments.

• The Pathalgadi movement was largely at its peak in the tribal belts, especially the Khunti district.

In 2016, the Jharkhand state assembly had approved two amendments in the Chhota Nagpur Tenancy (CNT) Act and the Santhal Pargana Tenancy (SPT) Act, which allowed the acquisition of tribal land for developmental projects.

This decision was met with numerous protests. The Pathalgadis had accused the state government of attempting to steal the rights of the tribal people.

Following this, the Raghubar Das-led BJP government in Jharkhand had filed more than 75 FIRs against the supporters of the Pathalgadi movement in different police stations of Khunti district in 2018

The cases will now be dropped under the new JMM-led coalition government.