Jharsuguda Airport has been developed by the Airports Authority of India in collaboration with Odisha Government at an estimated cost of Rs 210 Crores with a contribution of Rs 75 Crores from the State. 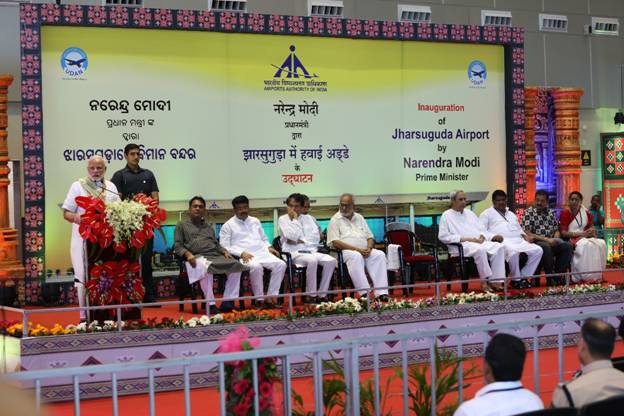 On the same occasion, Prime Minister also flagged off the UDAN flight on Jharsuguda-Raipur sector.

• Jharsuguda is the second airport of Odisha after Bhubaneswar to become operational.

• It is the first airport to provide necessary connectivity to Bhubaneswar, Raipur and Ranchi under the Regional Connectivity Scheme (RCS) UDAN.

• Jharsuguda Airport has been developed by the Airports Authority of India in collaboration with Odisha Government at an estimated cost of Rs 210 Crores with a contribution of Rs 75 Crores from the State.

• The Airport has been developed for all weather operations including night operations for A-320 type of aircraft.

• The Terminal Building of Jharsuguda Airport is a RCC composite structure equipped with modern passenger facilities.

• The interiors of the building depict local handicrafts, artwork and tourist destinations of the state highlighting rich ethos and culture of the region.

• The city side is being aesthetically landscaped with lush green areas connecting passengers to the nature.

• The Terminal Building has five check-in counters and one arrival carousel with peak hour handling capacity of 300 passengers.

Other airports of Odisha and their revival projects

In Odisha, other than Jharsuguda, three more airports, namely, Jeypore in Koraput District, Rourkela in Sundargarh District and Utkela in Kalahandi District are being developed to provide connectivity to remote and far flung areas of the coastal state.

For revival and upgradation of these four airports, Rs 370 crores has been allocated under the Regional Connectivity Scheme.