The President, Vice President, Prime Minister and Governors have voluntarily decided to take a 30 percent salary cut for one year.

The Union Cabinet chaired by Prime Minister Narendra Modi approved an ordinance on April 6, 2020 reducing the salaries and pension of the members of Parliament by 30 percent for one year in the wake of COVID-19 pandemic. The announcement was made by HRD Minister Prakash Javadekar.

The reduction will be applicable for one year and it was brought into effect from April 1, 2020. The HRD Minister announced that all the amount saved will go into the consolidated fund of India. 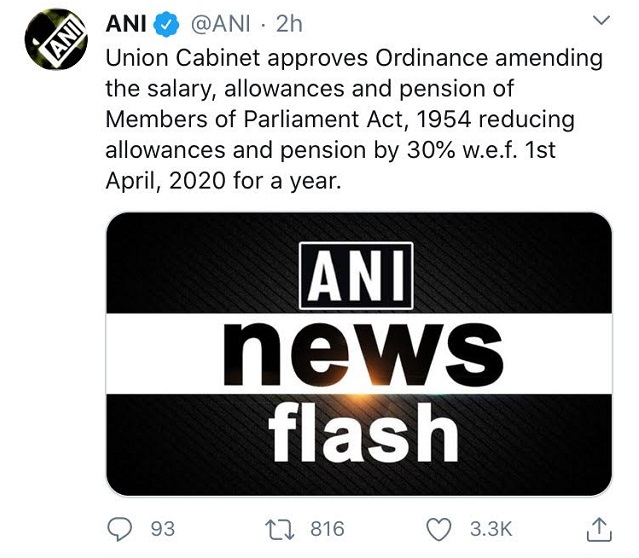 HRD Minister Prakash Javadekar also informed the press that the MPLADs (Members of Parliament Local Area Development Scheme) fund has been suspended till 2022. MPs’ funds of Rs 10crorse each will be pushed towards nation-building.

What is the consolidated fund?

The Consolidated Fund is a term that is used to describe the total revenue collected by the government through the form of taxes or expenses incurred in the form of borrowings and loans.

The cabinet decision came few hours after Prime Minister Narendra Modi urged his party workers to prepare for the long term. Many states have already made similar announcements as a measure to tackle the COVID-19 outbreak. Maharashtra was one of the first states to make the announcement, following by Kerala, Telangana, Andhra Pradesh, Odisha and Rajasthan have also announced pay cut of government employees depending on their position.