Railways to start Passenger Train Services: Nearly after two months, Railways is all set to resume passenger train services from 12th May 2020 – Tuesday. With the announcement of nationwide lockdown in March, all passenger train services in the country barring goods trains have been barred from operating since March 22nd. However, as the 3rd Phase of Coronavirus lockdown nears its end on 17th May 2020, Indian Railways has decided to resume its passenger operations ‘gradually’. So far, Indian Railways had continued to run its freight services to transport essential goods across the country and ‘Special Shramik’ trains to ferry stranded migrant workers to their home states.

Get complete details about resumption of passenger train services, 'Special Shramik' trains and where these trains will be operated from Here.

According to the official notification provided on the Indian Railways, a total of 15 pairs of trains (30 return journeys) will be operated as part of are passenger train operations from Tuesday onwards. These will be special trains that will be run between Delhi and Dibrugarh, Agartala, Howrah, Patna, Bilaspur, Ranchi, Bhubaneswar, Secunderabad, Bengaluru, Chennai, Thiruvananthapuram, Madgaon, Mumbai Central, Ahmedabad, and Jammu Tawi.

How to Book Train Tickets for Special Trains?

The seat reservation process for these special trains will start on 11th May 2020 – Monday from 4 PM onwards. The tickets for these special trains can be booked only online by logging onto IRCTC website and will not be available at the physical ticket counters present at train stations. This has been done to avoid crowding at the train stations and to ensure social distancing. Passengers must note that people with confirmed valid tickets will be allowed inside the railway station after thorough screening.

Precautions to be taken during Special Train Journey

According to the statement issued by Indian Railways, passengers will have to take certain precautions when they embark on their journey on these special trains. Passengers will have to mandatorily wear face masks and undergo screening process at the station before starting their journey. Any patient showing symptoms of COVID-19 will not be allowed to board the trains.

Details with regards to the social distancing norms in trains, the capacity at which they will run, availability of public transport to and from the railway stations, are still to be announced.

What will be train fare and cost?

The trains that are being run as special passenger trains from 12th May 2020 onwards will be air conditioned. Therefore, the fare that will be charged from passengers for their journey would be equivalent Rajdhani express train, as per an Indian Express report.

As of now, Indian Railways has only announced the destination cities to where these special trains will be run. However, the notification said that the detailed schedule along with details of in between stoppages will be released soon. Indian railways has also announced that based on the success of these trains, the national carrier will start operating more special services on new routes soon.

Will these be different from Shramik Trains?

The special Shramik trains, which railways started operating from 1st May 2020 onwards, are different from these special trains, as they are run on request of the states. These trains will continue to be run as per the current system. Daily around 300 Shramik trains are being run by the Indian railways to transport migrant workers from cities to their hometowns. In addition to this, Railways has also set aside around 20,000 coaches for COVID-19 care centres as well. 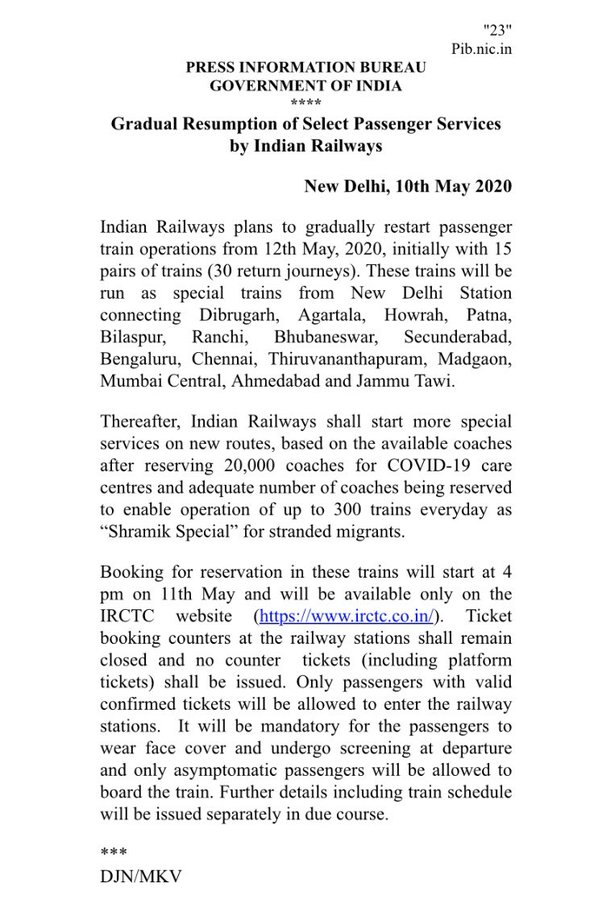