Ram Mandir Trust in News: Prime Minister Narendra Modi announced in the Parliament that Cabinet has approved the Ram Mandir Trust on February 05, 2020. PM Modi also announced that it will be named as ‘Shri Ram Janmbhoomi Teerth Kshetra’. He said that the government has decided this in the cabinet meeting.

It was approved in the Union Cabinet meeting that the Ram Mandir Trust will be completely free to take decisions on the construction of Lord Rama's temple in Ayodhya. Prime Minister Narendra Modi announced this in the parliament.

Union Home Minister Amit Shah tweeted that there will be 15 trustees in Shri Ram Janmabhoomi Teerth Kshetra Trust while one trustee will always be from Dalit society. He also tweeted that this trust will be completely free to take every decision related to the construction of the temple and 67 acres of land will be transferred to the trust. 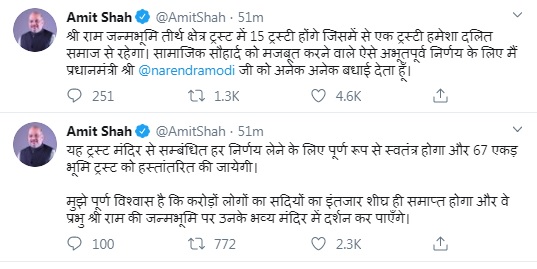 Apart from them, there will be some more trustees, including Homeopathic Doctor Anil Mishra from Ayodhya, Kameshwar Chaupal (SC), from Patna as a member of the Scheduled Castes and Mahant Dhirendra Das from Nirmohi Akhara, Ayodhya. Two prominent persons will be selected by the Temple trust.

The Supreme Court delivered the historic verdict on November 9, 2019. The bench had declared the ownership of the entire land to Ram Lala while giving the decision of the land related to the Ram temple dispute. On the other hand, the court had directed that 5 acres of land be provided to Sunni Waqf Board at another place for construction of a Masjid.