Rani Rampal will receive the World Games Athlete of the Year award from the official sponsor of The World Games. 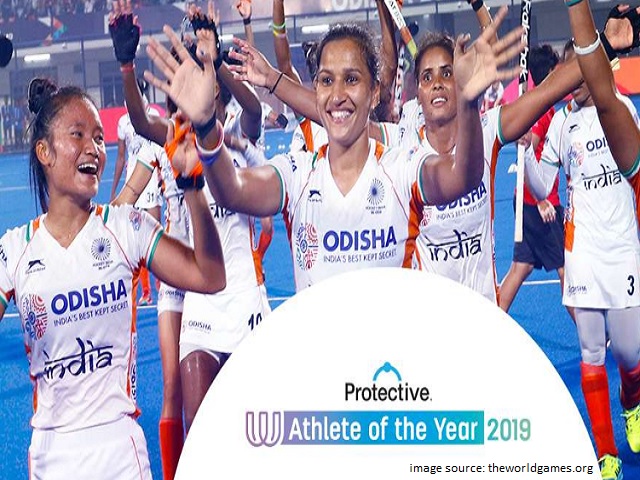 Rani Rampal, captain of Indian women’s hockey team, became the first hockey player in the world to win the prestigious ‘World Games Athlete of the Year’ Award. The World Games announced the winner on January 31, 2020, after a 20-day voting process by sports lovers around the world.

This award is given for outstanding performance, social concern, and good behavior. People across the world select the winner through voting. She received 1,99,477 votes out of a total of 7,05,610 votes. The Facebook post of The World Games reads, “Huge congratulations to The World Games Athlete of the Year: Hockey star Rani! Rani won the race with a massive number of votes: 199,477!”

Currently, Rani Rampal is playing matches in New Zealand. She dedicated this award to the team and country.  Rani Rampal will receive the World Games Athlete of the Year award from the official sponsor of The World Games. 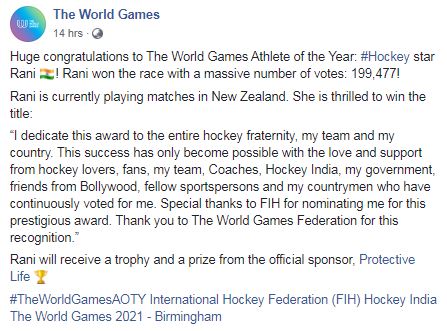 She played an important role in 2009’s Asia Cup to win a silver medal. She was also a part of the Indian team during the 2010’s Commonwealth Games and the 2010 Asian Games.

This year, Rani Rampal was awarded the Padma Shri. The Indian women's hockey team won the Asia Cup in the year 2017 in her captaincy.

Ukrainian karate player Stanislav Horuna secured second and Canadian athlete Rhea Stinn finished third in Powerlifting. A total of 25 players from different sports were nominated for this award. Apart from them, Sara Lopez of Columbia secured the eighth position in the Archery. She received a total of 28431 votes. She made a world record for a perfect 15-arrow round. She is also the first woman to shoot perfect 150 at stage three of the World Cup held in Medellin. 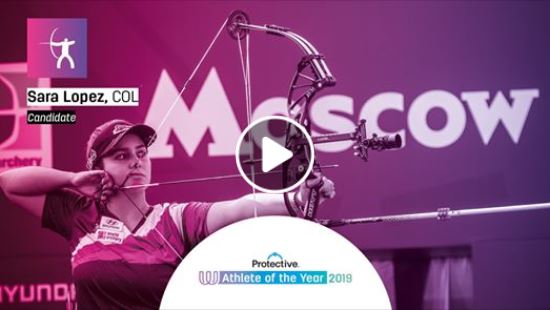 In 2019, the award was received by the Russian duo Maria Chernova-Giorgi Pataria, who performed well in acrobatic gymnastics. They received a total of 1,59,348 votes to win the award.