Shakib Al Hasan ban: Shakib Al Hasan, Bangladesh’s Test and T20 captain has been banned by the International Cricket Council (ICC) from all forms of cricket for two years, with one year suspended, after he failed to report a bookie approach.

The ICC imposed the ban on the all-rounder after he accepted all the three charges of breaching the ICC Anti-Corruption Code. As Shakib Al Hasan chose to admit the charges and accept the ICC sanction, the ICC suspended one year from his punishment and he will be free to resume cricket from October 29, 2020.

Speaking on the ban, Shakib Al Hasan said, “I am obviously extremely sad to have been banned from the game I love, but I completely accept my sanction for not reporting the approaches.” 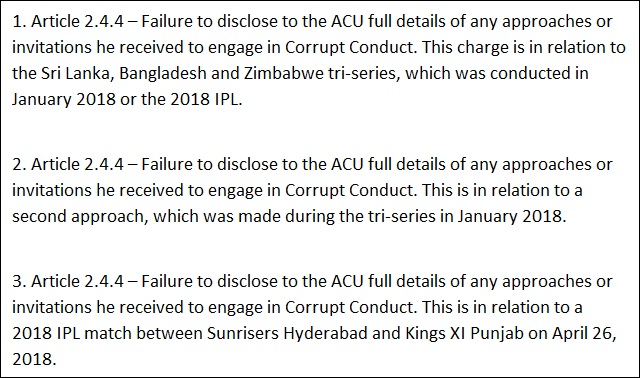 The ICC in its full report on Shakib Al Hasan’s ban reiterated that the cricketer, upon his selection in International matches for Bangladesh national cricket team, was automatically bound by the ICC Anti-Corruption Code. 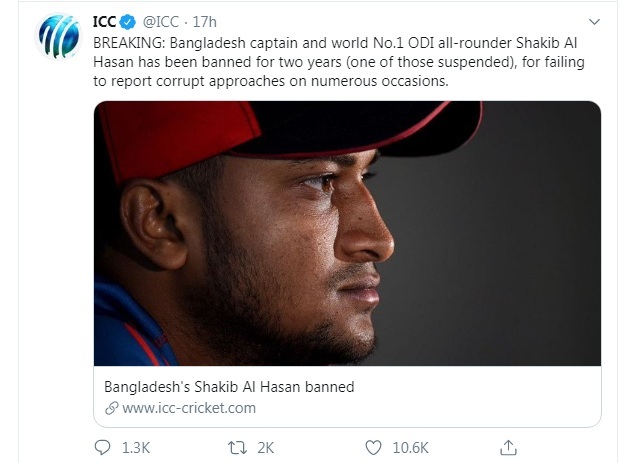 Under the ICC Anti-Corruption Code, the cricketer had agreed to:

(i) To comply with the Code

(iii) To submit to the jurisdiction of the ICC to investigate apparent or suspected Corrupt Conduct that would amount to a violation of the Code.

Shakib Al Hasan had attended several anti-corruption education sessions during his professional career, which contained reminders to the participants of their obligations under the code, including the very important duty of reporting the full details of any approaches or invitations received to engage in corrupt activity to the ACU without unnecessary delay.

Shakib Al Hasan, had in fact, even reported an approach that he had received to engage in corrupt conduct to an anti-corruption official in 2008 or 2009.

In January and August 2019, Hasan was interviewed by the ACU in Bangladesh in relation to an ongoing investigation looking into potential corrupt conduct including the suspected involvement of an individual, Deepak Aggarwal, in corruption in cricket.

During the interviews, Hasan admitted his various failures to report approaches made to him to provide inside information of the team to Aggarwal.  He also admitted that he was aware that his failure to report the approaches breached the Anti-Corruption Code.

ICC statement on the ban

Commenting on the ban, the ICC General Manager- Integrity, Alex Marshall stated that Shakib Al Hasan had attended many education sessions and he very well knew his obligations under the Code and he should have reported each of the approaches.

However, Marshall said that he was happy to accept Shakib’s offer to assist the Integrity Unit in future education, in order to help younger players to learn from his mistakes.

BCB reaction on the ban

The Bangladesh Cricket Board (BCB) released a statement saying that it respected the ICC’s decision and it shared similar sentiments against corruption in cricket.

BCB President Nazmul Hassan said that the BCB was extremely disappointed to know that such an experienced player such as Shakib had failed to report three corrupt approaches. However, he continued by saying that the board is pleased that he fully cooperated with the ICC ACU and pledged his commitment to its education programme.

The BCB President said that the board hoped that the all-rounder will come back as a better and wiser cricketer and serve Bangladesh for many more years upon the end of his sanction. Nazmul Hassan further assured that the BCB will support the cricketer’s efforts when he returns to cricket.

Shakib Al Hasan has played for Bangladesh in over 300 international matches, including 56 Tests, 206 ODIs and 76 T20Is. He had made his international debut in August 2006.

Shakib Al Hasan’s suspension means that he will not be a part of Bangladesh’s India tour. Bangladesh Cricket Board has chosen Mahmudullah to succeed Hasan as the captain of Bangladesh’s T20I side.

Mominul Haque will be taking over the captaincy from Shakib Al Hasan for Bangladesh’s test side. While Mahmudullah has captained Bangladesh in 5 T20Is, Mominul has never captained the team in any format of the game.

The Bangladesh cricket team is expected to leave for India on October 30, 2019. Bangladesh’s tour to India comprises three T20Is and two tests. The tour is scheduled to commence from November 3, 2019 with the three T20Is.

First Bangladesh vs India test match is scheduled to begin at Indore on November 14, 2019. The match will kick-off Bangladesh’s campaign in the World Test Championship. The second test will begin from November 22 at Eden Gardens in Kolkatta, which will be the first day/night test match.