Shakti-2019: A contingent of the Sikh Regiment of Sapta Shakti Command will represent the Indian Army in the joint drill. 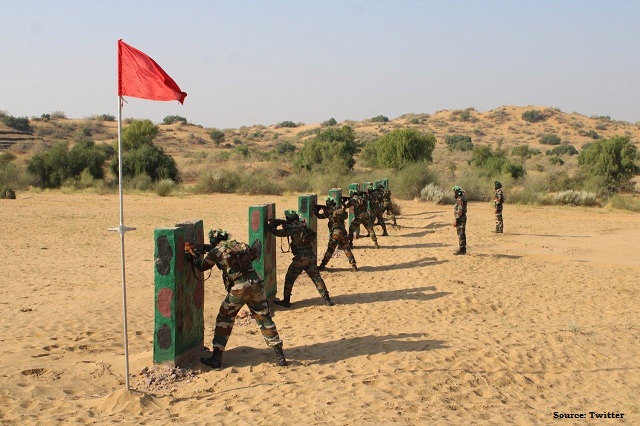 Shakti-2019: Indo-French joint exercise ‘Shakti 2019’ is scheduled to begin on October 31, 2019 in Rajasthan. The bilateral exercise will be conducted between the armies of both countries.

The army troop from France arrived in India for the training exercise with the Indian troops on October 26.

The duration of the exercise will be 36 hours. The 'Exercise Shakti' series was initiated between India and France in 2011.

The main objective of 'Shakti-2019' is to boost understanding, cooperation and interoperability between the armies of India and France.

'Shakti-2019' will mainly focus on counter-terrorism operations, set in the backdrop of semi-desert terrain. It will involve neutralization of terrorists in a village hideout.

The joint military drill will focus on a high degree of physical fitness, tactical sharing of the drill and learning of best practices and techniques from each other.

The Indo-French joint military exercise “Shakti-2018” was conducted in France from January 20 to February 4, 2018 at the combat training centre of Mailly-le-Camp, Aube, in eastern France.

The joint exercise aims to help maintain a high level of operational cooperation between the Indian and French armies and work on common operation procedures, which are useful, for instance, in missions conducted under UN mandates.

The major military drill followed up on the counter-terrorism joint exercise Shakti-2016 in Rajasthan, India.