Shikhar Dhawan will not play in rest of the World Cup 2019 matches due to his thumb injury. Rishabh Pant has joined the Indian squad as replacement of Shikhar Dhawan.

Shikhar Dhawan has been ruled out of ICC World Cup 2019 due to a thumb injury. Rishabh Pant has been included in the Indian Cricket team as a replacement of Shikhar Dhawan. Shikhar Dhawan was injured during match against Australia at The Oval. He Scored magnificent 117 runs in that match.

Shikhar Dhawan suffered the hairline injury after being hit by a Pat Cummins delivery. His X-ray didn't show any fracture but CT scan revealed details of injury otherwise and Dhawan was taken to a specialist for further assessment. Dhawan’s place at the top of the batting lineup was taken by KL Rahul, who was shifted up from the middle order to open against Pakistan at Old Trafford. He scored a fifty in that match.

BCCI said in a tweet “Shikhar Dhawan ruled out of the World Cup. We wish him a speedy recovery.” In a earlier tweet BCCI said that following several specialist opinions, he will remain in a cast until the middle of July and therefore will not be available for the remainder of #CWC19. 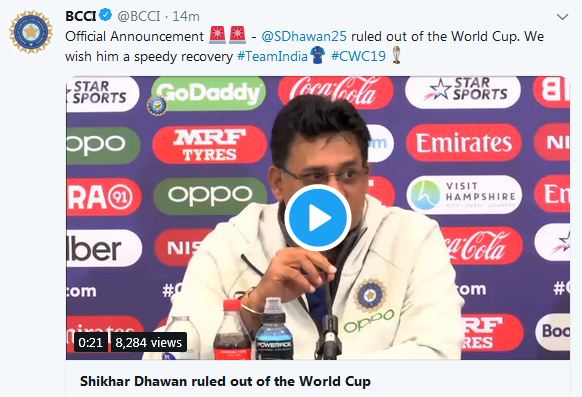 Promising wicketkeeper and batsman Rishabh Pant is already with the team as cover for Dhawan. He reached Manchester and joined the Indian team ahead of the clash against Pakistan. The team management had put Shikhar Dhawan under observation but called in Rishabh Pant from India as cover just before India's match against New Zealand.