IRCTC Tejas express: Tejas Express will run between Delhi and Lucknow on all days except Tuesday. 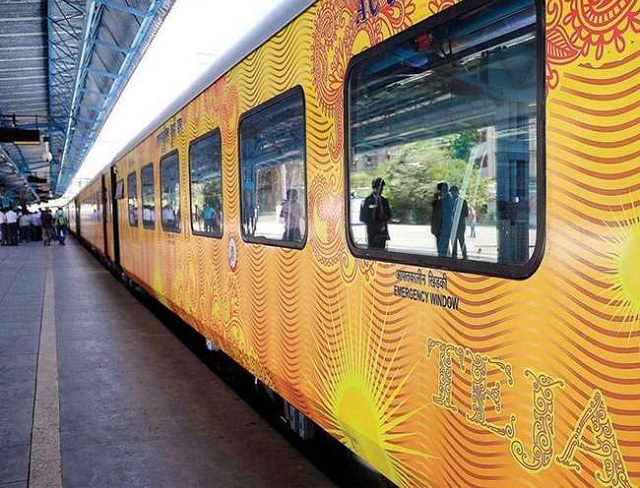 The Indian Railways approved the proposal to let certain trains ply privately under Railway Ministry’s 100 days action plan to increase its revenue and boost profitability. As IRCTC is an arm of the Indian Railways, the move doesn’t completely privatise the train but it opens the doors for more public-private partnerships in the Indian rail network.

Tejas Express: All you need to know

Tejas Express will run between Delhi and Lucknow from October 5, 2019. The commuters travelling between the two cities will now be able to get an aircraft-like feel on the premier train.

The Tejas Express will leave from Lucknow sharp at 6:10 am and reach New Delhi Railway station at 12:25 pm. In its return journey, the train is scheduled to depart from Delhi at 3.35 pm and reach Lucknow at 10.05 pm.

Overall, the train will take 6 hours and 15 minutes to complete the distance from Delhi to Lucknow.  In case the train is behind schedule, the Indian Railways will offer compensation to the passengers. Currently, the fastest train plying between the two cities is the Swarn Shatabdi. Tejas will take much lesser time to complete the entire distance, as it will have just two stops between Delhi and Lucknow- Ghaziabad and Kanpur, while the Shatabdi has five.

Tejas Express will run on all days except Tuesday.

Lucknow to Delhi fare: The travel from Lucknow to New Delhi will cost Rs 1125 for the AC chair car and Rs 2310 for the executive chair car.

The fares will operate on the flexi-fare scheme and thus, will vary along sections. Also, there will be no concessions for senior citizens or accreditation cardholders.

The passengers will only be able to book the ticket for the premium train through the website of IRCTC and not through a ticket booking window. The IRCTC mobile app could be used to book up to 60 days in advance.

The passengers could book their tickets up to 5 minutes before the scheduled departure of the train. There is no tatkal or premium tatkal ticket booking facility on the train.

For cancellation, full refund for confirmed and waitlisted tickets will be done with no extra cancellation fee. The passengers on the waiting list would be able to cancel their tickets up to four hours before the scheduled departure at Rs 25 per ticket.

The premium train will offer passengers with aircraft-like facilities such as baggage pick up and drop from Home-to-destination. The passengers will also be able to avail other facilities such as cab services, hotel bookings, combo meals, RO water purifiers, tea and coffee vending machines, compensation for train delay and call buttons for crew service.