Word of Decade: ‘They’ gets highest votes, check out why!

‘They’ was chosen as the Word of the Decade by American linguists and ‘my’ pronouns were most popular choice for Word of the year 2019. 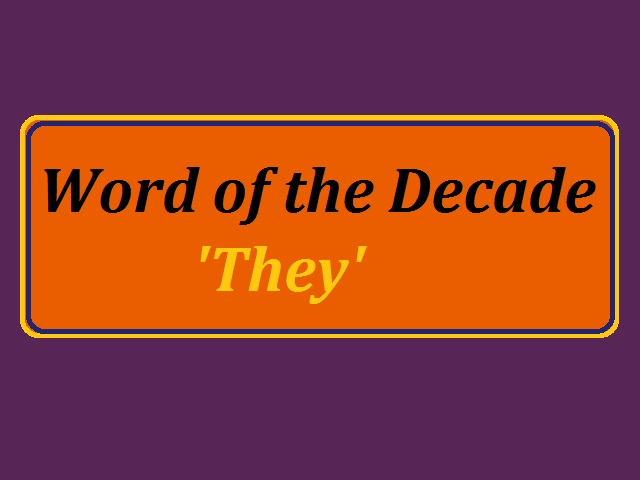 Word of the Decade: 'They’ was chosen as the Word of the Decade by the linguists in the United States of America on January 4, 2020. The move aims to recognize the growing use of third-person plural pronouns in a singular form to refer to those who do not identify with either male or female gender.

The singular pronoun ‘They’ was chosen as the word of the decade to recognize its growing use to refer to people whose gender identity is non-binary. ‘They’ was also adjudged as the world of the year in 2015.

The pronouns such as she/her were chosen as the word of the year by the American Dialect Society in a separate decision. The move aims to honour the increasing practice of introducing oneself by the set of pronouns one prefers to be called by. The ‘My’ pronouns were the most popular choice for Word of the Year 2019, again reflecting how the personal expression of gender identity has become an increasing part of common discussions.

Other 'Word of the Decade' nominees:

1. BlackLivesMatter: The hashtag was used largely to protest against the alleged disparities in the use of force by the police against African Americans.

2. Climate: The nomination of the word climate reflects the increased interest in the impact of climate change in the past decade.

3. #MeToo: The phrase #metoo was used to speak out against sexual harassment and sexual assault. The movement spread widely across the world since October 2017 with many women coming out with their tragic stories of harassment at the hands of men across different spheres of life including entertainment, corporate offices and politics.

1. OK Boomer: The phrase was increasingly used to retort to someone older from the Baby Boom generation, who expressed outdated views.

2. Cancel: The word was selected as a nominee in the context of meaning to withdraw support from someone or something that is considered unacceptable such as ‘cancel culture’.

3. Karen: The word was chosen to highlight the stereotype of a complaining, arrogant and demanding white woman, typically belonging to Generation X or “Generation Karen.”

The American Dialect Society was founded in 1889. The society is dedicated to the study of English in North America.

The society began choosing Word of the Year since the year 1991 and has picked only two ‘Word of the decade’ winners- ‘web’ for the 1990s decade and ‘Google’ for 2000s.

The ‘word of the decade’ and ‘word of the year 2019’ were decided by the members of the society during its annual meeting of academics, graduate students and word lovers. The vote took place by a show of hands.

In the past few years, social media has played an increasing role in popularizing certain words and phrases such as ‘fake news’ in 2017.