Union Minister of State for Power and Renewable Energy RK Singh on 16 November 2017 launched the Web Portal for Pradhan Mantri Sahaj Bijli Har Ghar Yojana ‘Saubhagya’. The portal can be accessed at http://saubhagya.gov.in. Through Saubhagya Web portal, every State can fill in the current status of progress of electrification works which will enable accountability for the State utility/ DISCOM. 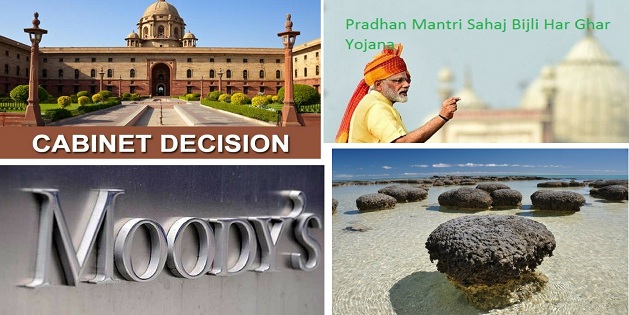 Union Minister of State for Power and Renewable Energy RK Singh on 16 November 2017 launched the Web Portal for Pradhan Mantri Sahaj Bijli Har Ghar Yojana ‘Saubhagya’. The portal can be accessed at http://saubhagya.gov.in.

Through Saubhagya Web portal, every State can fill in the current status of progress of electrification works which will enable accountability for the State utility/ DISCOM.

It offers a feature on village electrification camps and in line with that, DISCOMs will organize camps in villages for facilitating instant filling up of application forms and to complete requisite documentation to expedite release of electricity connections to households.

US credit rating agency Moody's raised India's sovereign rating to Baa2 from its lowest investment grade of Baa, while changing the outlook for the country's rating to stable from positive.

Since 2004, Moody raised the sovereign rating for the first time ignoring a haze of short-term economic uncertainties to bet on the nation’s prospects from a raft of policy changes by the government.

The revision of sovereign rating of India came after a gap of 14 years. The rating agency simultaneously upgraded India's local and foreign currency issuer rating to Baa2 from Baa3.

Researchers have discovered rare, living specimens of stromatolites, the oldest evidence of life on Earth,  deep within a remote and protected World Heritage Area in Australia.

The discovery was made by a group of researchers including those from the University of Tasmania in Australia. They made the discovery while surveying peat- bound karstic wetlands, an unusual type of swamp, which occurs only in peaty soils underlain by limestone and similar carbonate rocks.

The stromatolites were previously unknown. According to Bernadette Proemse, a researcher from Tasmania University, “The ecosystem has developed around spring mounds where mineral-rich groundwater is forced to the surface by geological structures in underlying limestone rocks.”

Facebook has announced new tools for video creators to join its platform in an attempt to take on Google-owned YouTube. The new tool will be called Facebook Creator App.

It will help the community create original video, go live with exclusive features and connect with their community on the Facebook.

The app initially has been started globally on the iOS platform and will roll out for Android users in the coming months. Video creators can also access Facebook Stories to engage with their fans.

The Union Cabinet on 16 November 2017 approved the Memorandum of Understanding (MoU) between India and Poland for the promotion of Civil Aviation Cooperation. The MoU will be for a term of five years.

The MoU will be aimed at recognizing the mutual benefit of cooperation in the field of Civil Aviation to establish and improve the Regional Air Connectivity in India.

It will provide support in the civil aviation market by reviewing any legal and procedural issues which may adversely affect cooperation between India and Poland.