The Ministry of Food Processing Industries and the Food Safety and Standards Authority of India have announced the launch of a powerful new tool called the ‘Food Regulatory Portal’ during World Food India 2017. 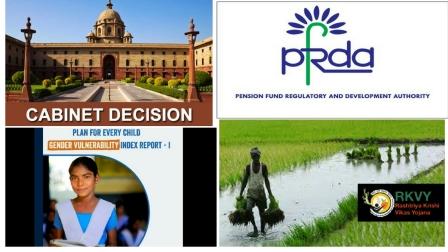 Union Ministry of Food Processing and FSSAI will jointly launch the 'Food Regulatory Portal',  a single interface for food businesses to cater to both domestic operations and food imports. While, “Nivesh Bandhu” will assist investors to make informed investment decisions.

World Food India Expo is a mega event which will showcase the entire value chain in the food sector. Over 150 Global CEOs will come under one roof to attend the event.

The Gender Vulnerability Index (GVI) prepared by Child development NGO Plan India has ranked the state of Goa at the top and Bihar at the bottom.

The other two states to occupy the top positions include Kerala and Mizoram, which were ranked 2nd and 3rd respectively. Bihar was joined by Uttar Pradesh at the bottom, while Delhi was placed near bottom at the 24th place

The composite index has been developed after analysing the situation of girls and women in the country on the basis of four important dimensions - Health, Education, Protection and Poverty. It will be useful in understanding the situation in states, as it ranks each state in every dimension of gender vulnerability.

The Pension Fund Regulatory and Development Authority (PFRDA) on 1 November 2017  increased the maximum age of joining under NPS-Private Sector (All Citizen and Corporate Model) from the existing 60 years to 65 years of age.

With this, any Indian Citizen, resident or non-resident, between the age of 60- 65 years can now join NPS and continue up to the age of 70 years in NPS.

Moreover, the subscribers who are willing to join NPS at the later stage of life will be able to avail the benefits of NPS.

The government would be allocating Rs 15,722 Cr for the implementation of the plan. The main objective behind the development is to make farming a remunerative economic activity by strengthening the farmer's effort, risk mitigation and promoting agri-business entrepreneurship.

The funds set aside for the plan would be provided to the states as 60:40 grants between Centre and States and 90:10 in the case of Himalayan and North Eastern states.

The Union Cabinet on 1 November 2017 approved the introduction of a Bill in Parliament to amend the National Council for Teacher Education (NCTE) Act, 1993.

The National Council for Teacher Education (Amendment) Act, 2017 seeks to grant retrospective recognition to the Central and State Institutions and Universities that conduct teacher education courses without NCTE permission recognition till the academic year 2017-2018.

The NCTE Act, 1993 came into force on 1 July 1995 and is applicable throughout the country, except the State of Jammu and Kashmir.