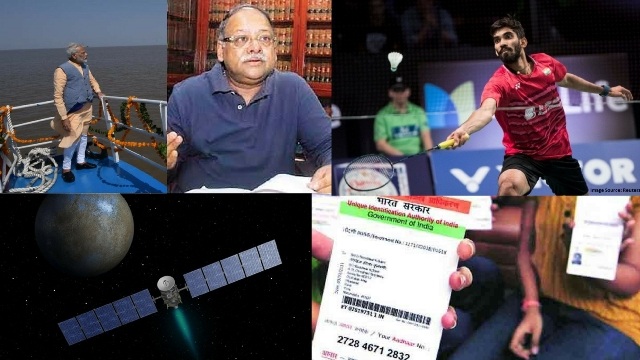 The eighth seeded Srikanth defeated his opponent, South Korea's Lee Hyun-il in straight games, 21-10, 21-5. Former world number one, Lee, is currently placed at the 17th rank. It was the first time Srikanth and Lee had faced each other.

Srikanth decimated his opponent in Super Series final just 25 minutes.He had previously defeated 12th seeded Wong Wing Ki from Hong Kong on 21 October 2017 in straight matches of 21-18, 21-17 to book a berth in the final.

The Prime Minister Narendra Modi on 22nd October 2017 launched Phase 1 of the RO RO (Roll on, Roll off) ferry service between Ghogha and Dahej.

This ferry service shall trim down the travel time between Ghogha in Saurashtra, and Dahej in South -Gujarat, from about 7-8 hours, to just over an hour. Ghogha located in Bhavnagar district of Saurashtra lies 32 km (17 nautical miles), across the gulf from Dahej in Bharuch district.

The Government has set a mandatory rule for banks and financial institutions (FIs) to check the original identification documents of individual person dealing in cash above the prescribed threshold of fifty thousand rupees, to tackle the use of forged or fake copies.

Ranjit Kumar on 20 October 2017 resigned as the Solicitor-General of India, the second highest ranking law officer of the Union Government. Kumar cited personal reasons and family commitments for his decision to resign.

Kumar's resignation came within months after the government gave him an extension. His tenure of three years as Solicitor General ended on 6 June 2017, but the government had extended the tenure on an ad hoc basis.

The National Aeronautics and Space Administration (NASA) on 19 October 2017 announced that it would be extending the Dawn mission at Ceres until its hydrazine fuel runs out, after which it will continue to remain in a stable orbit around the dwarf planet.

Ceres, a dwarf planet, is the largest object in the asteroid belt between Mars and Jupiter. During the extension, the spacecraft will descend to lower altitudes than ever before at the dwarf planet, which it has been orbiting since March 2015.

The main priority of the second extension of the Dawn mission is to collect data using the spacecraft’s gamma ray and neutron spectrometer, which measures the number and energy of gamma rays and neutrons.