Nepal PM Deuba is on a five-day long state visit to in India and the signed agreements will help the two nations to boost the bilateral relations. 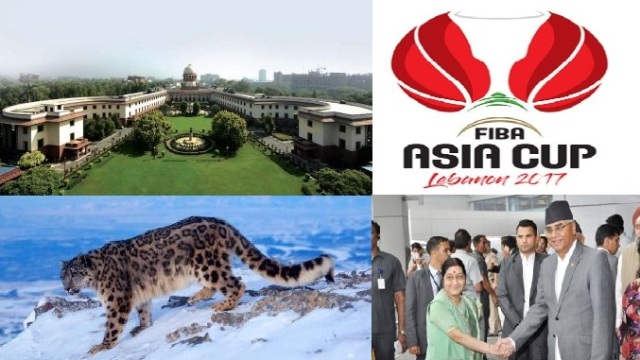 Eight agreements were signed between India and Nepal on 24 August 2017. The agreements/MoUs were signed to boost the bilateral relations between the two nations during Nepal Prime Minister Sher Bahadur Deuba visit to India.

The signed agreements include Agreement on Cooperation in the field of standardization and conformity assessment and reduction and prevention of illicit trafficking in narcotic drugs among others.

Australia on 20 August 2017 was crowned the FIBA Asia Cup 2017 basketball champions. The team defeated Iran 79-56 in the final to grab the title. On the other hand, South Korea clinched the third place with a win over New Zealand 80-71.

Nepal has launched its climate-smart snow leopard landscape management plan. The plan aims to safeguard the endangered species of snow leopard and its habitat.

The conservation plan was launched ahead of the International Snow Leopard Summit and Ecosystem Forum that addresses key current and emerging threats to the snow leopards, including climate change.

The Union Cabinet on 23 August 2017 approved amalgamation of Public Sector Banks through an Alternative Mechanism (AM) with an aim to facilitate consolidation among the Nationalised Banks to create strong and competitive banks.

The decision regarding creating strong and competitive banks will be completely based on commercial considerations. The proposal of Consolidation must start from the Boards of Banks.