Mehrishi was administered the oath of office and secrecy by President Ram Nath Kovind at a function in Rashtrapati Bhavan, Delhi. Several dignitaries including Vice President M Venkaiah Naidu and Prime Minister Narendra Modi were present at the occasion. 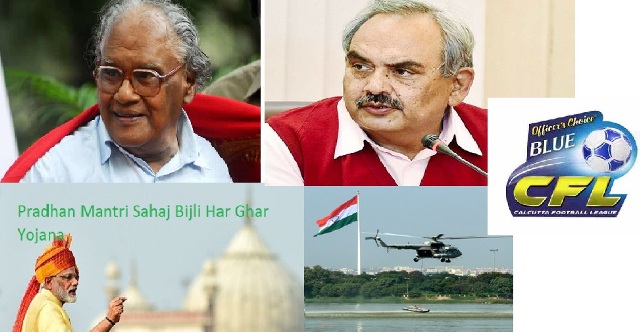 Listed on the agenda of the Cabinet meeting held last week, the scheme is expected to cover all rural families after expected electrification of all villages by the end of 2017.

The Yojana mainly aims to provide last mile power connectivity to all rural and urban households. The scheme would provide subsidy on electrical equipments such as transformers, meters and wires. The Yojana aims to re-enforce the centre’s target of achieving power for all.

Renowned scientist C N R Rao in September 2017 became the first Asian to be chosen for the Von Hippel Award.

Rao is chosen for the prestigious award for his immense contribution in materials research.

The award citation noted Rao’s immense work on novel functional materials, including nanomaterials (having particles of nanoscale dimensions), graphene (the strongest and thinnest material) and 2D materials, superconductivity, and colossal magnetoresistance (change in electrical resistance of a material in a magnetic field).

Rao will be presented with the award on 29 November 2017 in Boston during an MRS meeting.

Rajiv Mehrishi sworn in as new CAG of India

Rajiv Mehrishi took over as the 13th Comptroller and Auditor General (CAG) of India on 25 September 2017, succeeding Shashi Kant Sharma, who left office on 22 September.

Mehrishi was administered the oath of office and secrecy by President Ram Nath Kovind at a function in Rashtrapati Bhavan, Delhi. Several dignitaries including Vice President M Venkaiah Naidu and Prime Minister Narendra Modi were present at the occasion.

His predecessor Shashi Kant Sharma had taken over as the CAG on 23 May 2013. Prior to his appointment, Sharma was serving as the defence secretary.

The team held Mohun Bagan to a 2-2 draw in a thrilling match at the Kanchenjunga Stadium in Siliguri, West Bengal.

East Bengal has won all the CFL titles since 2010. They have a total of 39 CFL titles.

A multi-agency exercise Pralay Sahayam was conducted on 23 September 2017 on the banks of Hussain Sagar Lake in Hyderabad, Telangana.

The event demonstrated efforts of all central and state agencies, National Disaster Relief Force (NDRF) and the Armed Forces towards jointly tackling an urban flooding scenario in Hyderabad.

For the purpose of the multi-agency exercise, Hussain Sagar Lake was transformed into urban colonies partly submerged under water, post heavy showers in the city.

A large number of dummy structures depicting multi-storied buildings and houses with stranded people, power stations, educational institutes etc., were erected in the lake in an inundated condition. The hapless stranded occupants of these dwellings were rescued in joint operations carried out by the State Government agencies, Police, State Fire & Emergency Services, NDRF, CISF and the Armed Forces.