Government of India and European Investment Bank (EIB) on 5 October 2017 signed the Finance Contract for lending of €300 million for Bangalore Metro Rail Project Phase II Line R6. The project aims to bring in quantum improvement in transportation sector in city in tandem with Bangalore Metropolitan Transport Corporation (BMTC) and other modes of urban transport. 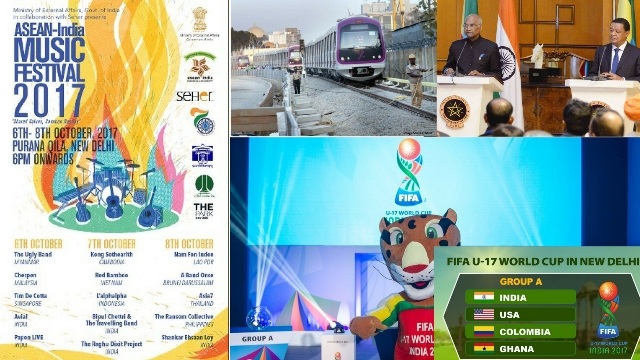 The project aims to bring in quantum improvement in transportation sector in city in tandem with Bangalore Metropolitan Transport Corporation (BMTC) and other modes of urban transport. It also aims to ensure modern transport facility for the commuters.

The first ever ASEAN-India music festival began at Purana Quila in New Delhi on 6 October 2017.

The 3-day festival is being organised by the Ministry of External Affairs, Government of India in collaboration with Culture Ministry to celebrate the 25th year anniversary of ASEAN-India Dialogue Relations. It will conclude on 8 October 2017.

The theme for this commemorative year is ‘Shared Values, Common Destiny’.The theme along with this festival aims to boost cultural influences among the people of the ASEAN member states and India.

The two ministers were on a two-day visit to the Union Territory. They laid the foundation stones at events held at Port Blair, Diglipur and Baratang.

The much-awaited FIFA U-17 World Cup kicks off today, 6 October 2017 with four opening day matches to be played in Delhi and Mumbai.

The opening matches would be played by teams in Group A and B. In Delhi, the inaugural match would be played between Group A teams Colombia and Ghana at Jawahar Lal Nehru Stadium, followed by hosts India who would take on team USA in the second match.

In Mumbai, Group B team New Zealand would be taking on Turkey in the first game at DY Patil stadium in Navi Mumbai, followed by Paraguay against Mali.

India and Ethiopia on 5 October 2017 signed agreements on trade, communication and media to boost bilateral ties.

The agreements were signed in the presence of President Ram Nath Kovind and his Ethiopian counterpart Mulatu Teshome at the National Palace in Ethiopian capital Addis Ababa following detailed discussions on economic relations.

Speaking on the occasion, President Kovind said India wanted to strengthen bilateral ties with Ethiopia."We will be working closely to develop trade, investment and people-to-people relations between the two countries," he said.