UNGA 2019: The UNGA decides on important matters such as peace and security, discusses various global issues and budgetary matters. 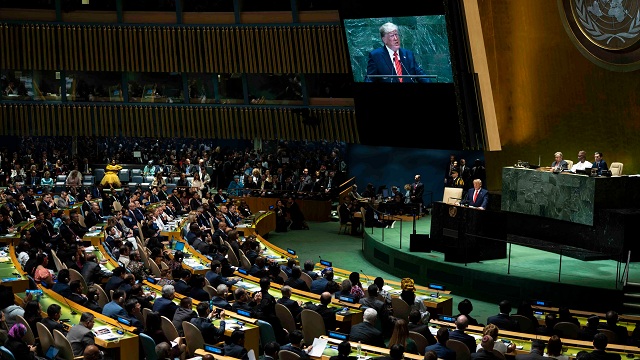 UNGA 2019: The 74th session of the United Nations General Assembly (UNGA) is currently on at the UN headquarters in New York. The UNGA 2019 began on September 24 and it would conclude on September 30, 2019. Several leaders addressed the General Assembly during this time and dozens more are scheduled to speak today, including Indian Prime Minister Narendra Modi and Pakistan PM Imran Khan.

The UNGA 2019 meeting comes amid growing global tensions including tensions between India and Pakistan over Kashmir, recent attacks on major Saudi Arabian oil facilities, US-Iran tensions and rising extremism. The concern over climate change has also grown many folds after the massive fire in the Amazon rainforest, the world’s largest rainforest.

The UNGA or United Nations General Assembly is the parliament of the world, where all the 193 UN member states are represented. The UNGA is the deliberative, policymaking and representative organ of the UN. The UNGA along with the UNSC are two of the six main organs of the United Nations.

What does UNGA do?

The UNGA takes a decision on important matters such as peace and security, discusses various global issues and budgetary matters. The assembly also decides on matters such as the admission of new members.

How does the UNGA take a decision?

The UNGA takes decisions on the important questions through a vote. Admission of new members and budgetary matters require a two-thirds majority, while the decision on other issues are taken by a simple majority.

Who gets to vote at UNGA?

Each sovereign state gets one vote and the votes are not binding on the membership, except in budgetary matters. The UN General Assembly has no binding votes or veto powers like the UN Security Council.

What are the powers of UNGA?

The UNGA can express world opinion, promote international cooperation in various fields and make recommendations to the UNSC and elect the Security Council’s non-permanent members.

Where is the UN General Assembly?

The UN General assembly takes place annually at the headquarters of the United Nations in New York, US.

Who is the current UNGA President?

The current UNGA President is Tijjani Muhammad-Bande of Nigeria, who was elected to the post on June 4, 2019. He succeeds María Fernanda Espinosa of Ecuador, whose term ends in September 2019.

There are how many countries in the UN General Assembly?

All the 193 UN member states have equal representation in the UN General Assembly. The membership in the organization is open to all peace-loving states that accept the obligations under the UN Charter and are able to carry them out.

Which countries are not a part of UNGA?

Among the world’s 196 countries, 193 are UN member states and three nations- Palestine, the Vatican City and Taiwan are not a part of the international organization as their country status is not recognized globally due to political and religious reasons.

The two Koreas-North and South Korea were admitted as members of the United Nations in 1991.

Which country always speaks first at the UNGA?