UNICEF terms past decade as ‘Deadly’ with 1,70,000 grave violations against children

Almost eight years of conflict has led Syria to one of the gravest conflicts of the current times, with the children paying the heaviest price. 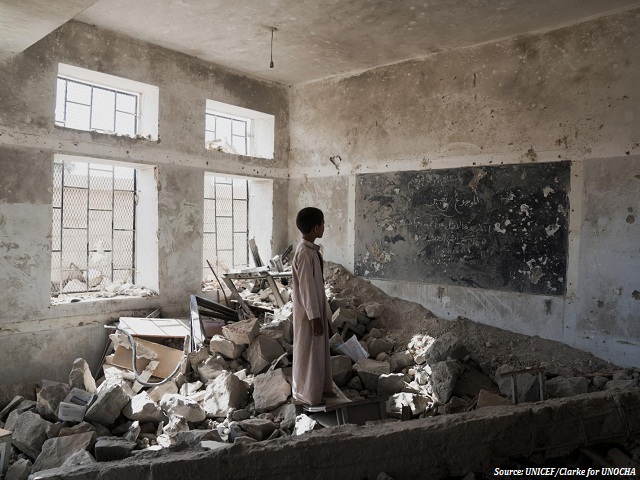 The United Nations Children’s Fund (UNICEF) released its year-end report on December 31, 2019, which termed the past decade as a ‘Deadly Decade’ for children in conflict with more than 1,70,000 grave violations against children since 2010.

The UNICEF report highlighted how killing, maiming, sexual violence, abduction and recruitment into armed groups cost millions of children their childhoods, dreams and even their lives in the past decade.

• The UN report stated that the number of attacks on children increased by almost three-fold since 2010, hence UNICEF named the decade as ‘Deadly Decade’.

• The number of countries experiencing violence was also reported to have increased since 1989, the year when the Convention on Rights of Child was passed.

• Further, the UNICEF report stated that around 24,000 grave violations against children were recorded in 2018. In 2019, there were more than 10,000 violations in the first half itself.

• The violations against children include killing, sexual violence, maiming, abduction and recruitment into armed groups and terrorist attacks.

• The violations were more prevalent in countries experiencing heavy-armed conflicts including northern Syria, Yemen, Ukraine and the Democratic Republic of Congo.

Countries that witnessed most attacks on children in 2019

Syria: Almost eight years of conflict has led the country to one of the gravest conflicts of the current times, with the children paying the heaviest price. Children have suffered immensely in the nation due to brutal violence, displacement and harsh conditions. While many drowned while fleeing the conflict zones with their parents, many others were left stranded in detention centres, camps and orphanages and are being forced to live in appalling conditions and face constant threats to their well-being. These children are the world’s most vulnerable.

Mali: The ongoing humanitarian crisis in the western African nation worsened in 2019 after an armed attack on one of its villages. The attack led to the killing of many children.

Yemen: After Syria, Yemen is another nation that has witnessed a major humanitarian crisis in the past decade. Years of conflict in the nation have led to acute poverty, depriving millions of children in the nation of their basic rights such as the right to education. Around two million children are out of school in Yemen. In 2019, a bomb blast in Yemen’s largest city Sana’a, near two schools, critically injured many children and killed at least 14 of them.

Myanmar: In May 2019, there were several reports of children being killed and injured during the escalation of violence in Myanmar’s Rakhine State.

Afghanistan: Several children were injured during a bomb attack during rush hour in Afghanistan’s capital city, Kabul in the beginning of July 2019.

South Sudan: Thousands of children were estimated to have been forcibly recruited to the armed forces and groups in the country. Even those who were released by their captors or managed to escape were reported to be displaced and deprived of basic needs such as food and shelter.

Ukraine: Almost half a million children are affected by the conflict in eastern Ukraine with 36 attacks on schools in 2019 alone.

Nigeria: The non-state armed groups in the nation have been recruiting children as combatants and non-combatants since 2012.

Cameroon: The nation, which has witnessed almost three years of violence and instability, has deprived almost 855,000 children of their right to education. With villages, schools and even health facilities under attack, thousands of children have been living in fear. The humanitarian crisis, which was limited to four regions in 2017, spread to eight regions in 2019.

Democratic Republic of the Congo: Violent attacks against Ebola treatment centres in the eastern Democratic Republic of the Congo in February 2019 worsened the efforts to fight the disease. The disease has had the worst impact on children, as they have not only been infected themselves but have also been exposed to death and suffering firsthand with the death of their parents, caretakers or loved ones due to the virus. Many children were also forced to spend weeks in isolation after coming in contact with someone infected with the virus.

Afghanistan: The UNICEF had announced in December 2019 that an average of nine children were killed or maimed every day in Afghanistan in the first nine months of 2019.

According to the United Nations Children’s Fund (UNICEF), millions of children were forced to suffer in 2019 due to devastating violence around the world. Dozens of violent armed conflicts killed, maimed and displaced children, forcing them to flee their homes in harsh conditions.